Difference between revisions of "Old Khndzoresk" 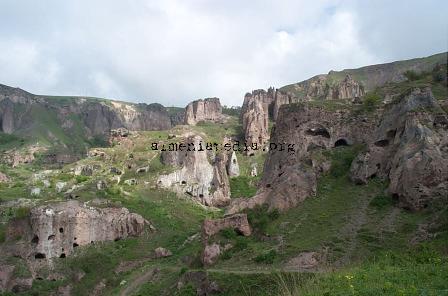 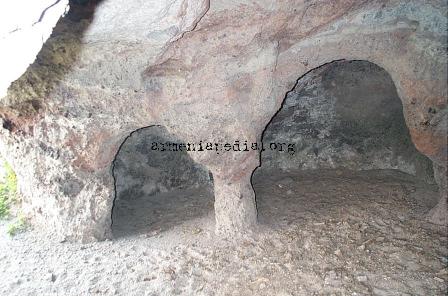 Kh'ndzoresk, near Goris is a great place for hiking and spelunking. There are a very large number of caves, although most of them are man made and rather small. There are ruins of an old village, churches, tombs, great rock formations, springs and a new bridge that spans the gorge. There is a lot of stinging nettle, so pants might save you some pain.

Directions to the village

Crossing the bridge at the entrance to Goris, the road continues toward Lachin and Stepanakert, first passing the turnoff right to Hartashen (653 p, founded 1965-70 from the three small villages of Azatashen/Alighuli, Dzorashen and Aigedzor, with a S. Hripsime Church in one of them, and then the metal archway marking the right turn for Khndzoresk (1954 p). At the far end of Khndzoresk village, turn right {and almost fully around} (straight goes to Nerkin Khndzoresk --184 p) and wind down past a cemetery. A deteriorating dirt track descends into the gorge and the interesting remains of Old Khndzoresk* =70= (39 30.33n x 046 26.00e).

Old Khndzoresk is a medieval and early modern village largely hewn into the soft rock. You pass a number of artificial caves now used as stables, and other building remains. At the bottom of the gorge, turn downstream to reach a S. Hripsime Church of 1663. On a spur beyond on the right side of the gorge is a 17th c. Anapat (hermitage), with the tomb of Mkhitar Sparapet, who was Davit Bek's chief aide and successor in his war to drive out the infidel Muslims. Mkhitar was murdered in 1730 by the nervous Armenian villagers of Khndzoresk, who had vainly beseeched him to hole up in his own stronghold rather than their village. The Ottoman Pasha in Tabriz, to whom they presented his head, found this treachery distasteful, and decapitated the murderers. The site is green and memorable. There is a 17th c. cave church of S. Tadevos somewhere about, and a couple of 17th c. spring monuments.

Rumor has it that many years ago, when an airport was built in the Goris village of Khot, the locals bragged, “How do those villages without an airport make a go of it?”

The same happened when the world’s longest aerial tramway was opened in Tatev. Residents from neighboring towns boasted that tourists would come from all over the world just to witness this attraction.

Only this time, Khndzoresk residents couldn’t put up with another “slap in the face”. They decided to build their own “cable-less tramway”. Over the next several months, a 160 meter long swinging bridge appeared. It rises 63 meters high above the ground and weighs a whopping14 tons.

The bridge connects the two banks of old Khndzoresk, where one can see the 4 churches located within this region and the famous “Nine Children” fountain.

Ancient myth states that when Khndzoresk was once again under attack, the village mothers and daughters stood right beside the males, resisting the attack that had surrounded them. A mother of nine children, a widow named Sona, falls victim during the assault. In Sona’s memory and for the future welfare of her 9 orphans, her father, master Ohan, constructs a beautiful arched fountain at the site of a giant walnut tree where water seeps from the root. The basin of the fountain, in the central Pitzidzor district of the village, reminds one of a woman’s breasts. One can only drink from the basin by lying prostrate on two hands.

Once the fountain’s construction was completed, Ohan reached out to a saint, “Oh, sacred fountain, I beg you, let the fountain’s water transform into our Sona’s breast-milk and protect my orphaned grandchildren.”

The festive opening of this swinging bridge took place today. It was built at the initiative and sponsorship of a Khndzoresk businessman` Zhora Aleksanyan, who dedicated the structure in memory of his parents, Haik and Tamara Aleksanyan.

“The ultimate goal, naturally, is to promote tourism in this region. However, as a native of this land and water, I wanted old Khndzoresk, where my father’s house is located, to become attractive enough to the outside world and where the term patriotism doesn’t exist on paper only. I want the bridge to serve as a road for the youth use to get back to their roots,” says Zhora Aleksanyan, who doesn’t hide the fact that the first time he crossed the bridge he couldn’t hold back the tears.

He also expressed his gratitude to the local villagers who supported his idea and made it possible to turn into reality. Zhora speaks with particular admiration about the welder Seyran.

In the words of road engineer Hakob Gyourzadyan, the swinging bridge is quite interesting in its own way and the people who launched the project found unique means to make this bridge a reality. He estimates that the bridge can accommodate about 700 people at once.

Vardan Vardanyan, a deputy of the Minister of Urban Development, believes that the bridge is the best stimulus to develop tourism within this region. In his opinion, the bridge itself is fascinating by the mere fact that it was completely built by hand. Not one piece of machinery was used in the process.

Khndzoresk mayor Seryozha Hayrapetyan points out that the issue of emigration has never played a significant role in Khndzoresk. Moreover, it seems it has become tradition in Khndzoresk that native entrepreneurs working abroad, rather than helping the villagers by “importing” their labor, invest in Khndzoresk so that the border village can prosper and that the youth can ensure their wellbeing parallel to organizing their leisure time.

In this regard, according to the mayor, the newly constructed bridge is a source of and encouragement to the youth, whose active participating in making the bridge a reality. Certain concrete coverings of the bridge were carried on horseback to the site.

Syunik Regional Governor Souren Khachatryan, who had the honor of opening the bridge, stated that by a decision of the RA government a comprehensive program designed to promote tourism in Goris has been prepared.

According to the program, “informative and educational-cultural centers of tourism are planned for the Tatev, Khndzoresk, Halidzor and Karahounj villages in Syunik Marz, where the intangible inheritance of the region is better protected in terms of tradition, lifestyle, dialect and cuisine.”In this sense, the construction of Khndzoresk’s swinging bridge of Khndzoresk is one of the first steps.

According to him, every single corner of the Syunik Marz can promote the development of tourism, provided that similar initiatives increase. The governor expressed his willingness to assist in the implementation of these initiatives.