Difference between revisions of "Odzun Church" 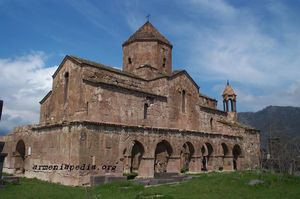 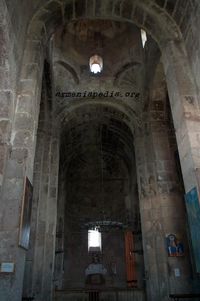 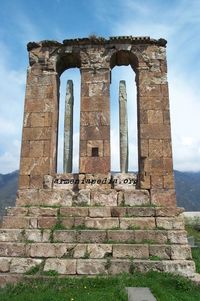 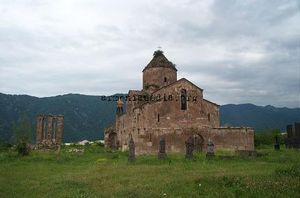 Just S of the built up area of Alaverdi, a paved road switchbacks up the gorge wall to a sizable plateau. Going straight W, one reaches the village of Hagvi (386 v.), with a ruined 12-13th c. church. The main fork S leads to Odzun (3849 v.), with its famous church about 100 m W on the main paved village road. Dated stylistically to the first half of the 7th c., according to medieval historical tradition the church was built by Catholicos Yohan of Odzun (717-728), about whom Kirakos Gandzaketsi (tr. Bedrosian) offers the following anecdote: Lord Yovhannes was a learned and holy man, attractive physically and even more so spiritually. [The Caliph] Hisham [724-43] summoned him to court, and honored him greatly for the comeliness of his appearance. Now [Yovhannes] had sprinkled gold dust in his beard [before] he went into [the Caliph's presence]. Seeing Yovhannes, Hisham was amazed at his handsomeness and mildly said to him: "They say about your Christ that he was very meek and humble and greatly loved poverty, The Christian order professes that those who are their leaders honor poverty and plainness more than luxury and riches. Then why are you bedecked so"? The blessed one replied: "You have nothing more than your servant except a crown and royal dress, yet it is for these things that people fear and honor you. Our first Fathers were miracle-workers and undertook wondrous disciplines. For that reason, people who fell into their hands feared them and obeyed their commands with trepidation. But we are not like them; therefore we adorn ourselves in clothes and fashion, so that they will not ignore our commands. Then, baring his breast, [Yovhannes) showed [Hisham] a hairshirt which was worn underneath his clothing. And he said: "This is my dress." The king marvelled and praised the beliefs of the Christians. He said to the blessed one: "Ask of me what you will and I will grant it to you". The patriarch responded: "I ask of you three things which are easy for you to grant. Do not force Christians to abandon their faith, but leave each to his wishes. Second do not make the liberty of the Church subject to you through taxation, take nothing from the priests or deacons. Third, wherever there are Christians in your realm, let them perform their rites fearlessly. Give this to us in writing, and my entire people will serve you" At once [Hisham] ordered that a document be written as requested, stamped it with his own ring, and gave Yovhannes many gifts. He mustered many troops to accompany him, and sent him to Armenia with great honor. When Yovhannes arrived he persecuted all the Greeks in Armenia, both overseers and soldiers. The Greeks fled so quickly that they did not have time to take their treasures with them. So they buried them in the ground, wrote a description of the hiding place, and took the information with them.

The blessed patriarch, placing our country under Ishmaelite rule, then convened a meeting in Manazkert ... (to weed out the Chalcedonians) Thus providing the land with all virtuousness, he occupied himself with doctrine and prayers. [Yovhannes] also constructed a large church in his village of Odzun (which is close to the city Lorhi) and he settled in a spot he had chosen for his residence, a short distance from the village. One day, when the blessed one was at prayer, two frightful dragons fell upon the residence of this virtuous man. When lord Yovhannes' deacon saw this, he was terrified, and clamored for the holy man's help. Lord Yovhannes made the sign of the Cross before them and the two dragons instantly turned into stone. They exist today. Water spurts from the belly of the dragons, and it is an antidote for all snake-biten folk who turn to the saint with prayers. After being patriarch for eleven years, and having lived a virtuous life, lord Yovhannes reposed in Christ. (Note: Odz means "Serpent", and presumably the name of the town the legend are connected.) Beside the church is an unusual 7th c. funerary monument with two sculpted pillars depicting biblical scenes and the Christianization of Armenia. On the NE edge of town is a ruined 7th c. "Tsiranavor" basilica.

"The church is situated in the north of Armenia in the village of Odzun in the region of Alaverdi. In its original conception, variety and majesty of surfaces and volumes, it is considered one of the finest Armenian cupola'd basilicas. On the north and south side, it has arcaded cloisters while the west cloister has a blind wall with an arched entrance in the middle. To judge by its architectural and artistic properties the edifice belongs to the sixth or seventh centuries. In the time of Hovanes Otznetsi (8th century) some complementary work was probably executed in various parts of the building."

Standing on a tiered base and constructed in polished stone in the form of two arcades, this monument has a delicate harmony of symmetry. In the opening of each arcade is a rectangular stele, four meters high. On its four faces are finely carved bas-reliefs of scenes depicting the propagation of Christianity. These sculptures are remarkable specimens of the older Armenian religious art.