Difference between revisions of "Mongol invasion of Armenia" 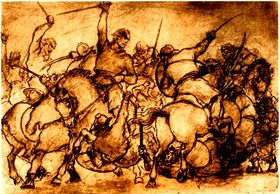 The 4th thirteenth century invasion of Armenia occurred in 1236. At the head of the army of some 60,000 Turkmens and Kipchak mercenaries, Jalal al-Din invaded northeastern Armenia following the age-old route of invasion, through Nakhichevan and northward. He took and devastated Dvin, and at Garni defeated the 70,000 man strong Armeno-Georgian army commanded by Ivane. The Mongol conquest of Western and Southern historical Armenia took place between 1242 and 1245. These lands were inhabited by Armenians and were under the political domination of Seljuks.