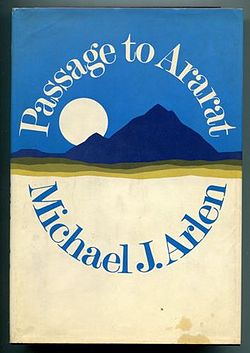 Michael J. Arlen is the son of Michael Arlen.

Michael John Arlen (born December 9, 1930, London, England)[1] is an American writer, primarily of non-fiction and personal history, as well as longtime staff writer and television critic for The New Yorker.

Arlen is the son of a British-Armenian writer, Michael Arlen and former Countess Atalanta Mercati of Athens, Greece. His early childhood was spent with his family in Cannes, in the South of France.[2] At the outbreak of World War 2, he was at boarding school in England and went with his school to join a Canadian school in Ottawa, Canada.[3] Later he transferred to St. Paul's School, Concord, NH,[4] after which he went to Harvard College, where he was a co-President of The Harvard Lampoon and graduated in 1952.[5]

Arlen worked as a reporter on Life for five years, from 1952 to 1957,[6] before joining the staff of The New Yorker in 1957 where he remained until 1990. His first book was Living-Room War, a collection of his television pieces centered on the Vietnam War.[7] The book title is a term coined by Arlen that has gone on to be heavily referenced in Academic writings and editorials.[8] His two best-known books are Exiles (focused on his childhood in the South of France)[9] and Passage to Ararat (about his Armenian heritage),[10] both of them personal histories which first appeared in full in The New Yorker.

Arlen has four children from his first marriage. He married a second time, to screenwriter Alice Albright, in 1972, and together they raised an extended family of seven children. Alice Albright Arlen died in 2016.[12]