Difference between revisions of "Little Armenia" 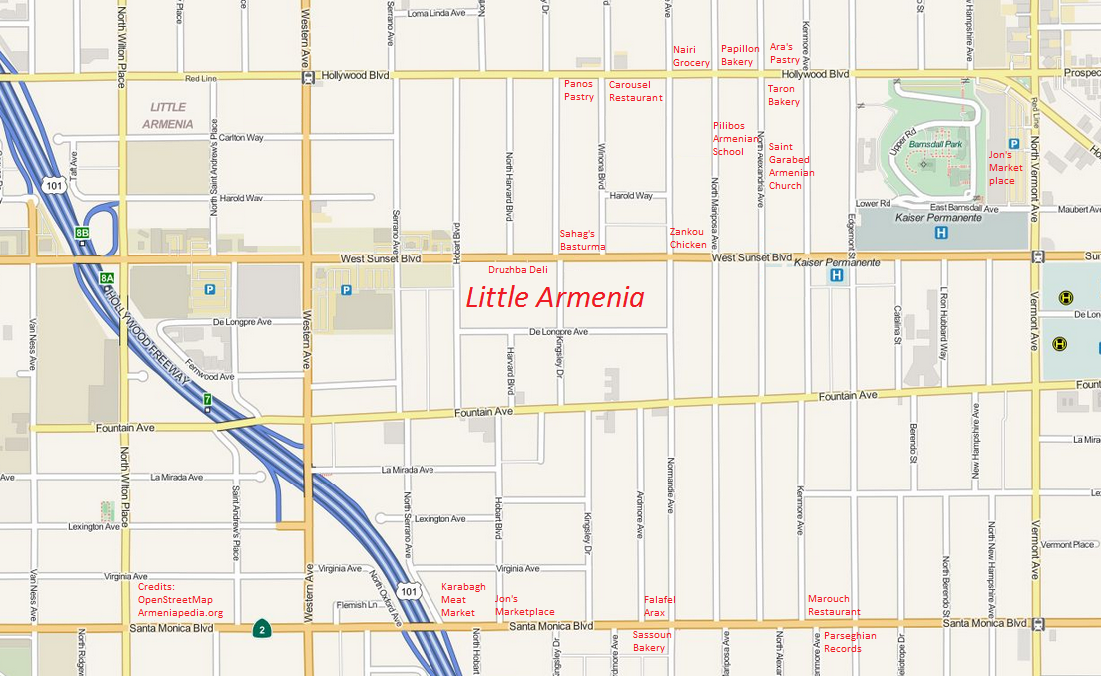 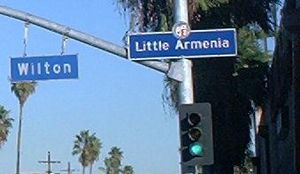 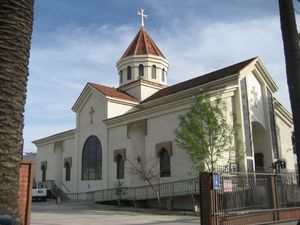 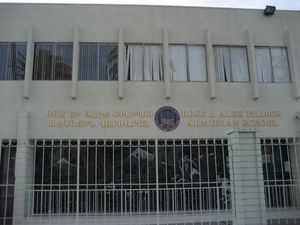 St. Garabed Armenian Apostolic Church, built in 1978 is in Little Armenia on Alexandria Avenue. The church is located front of the Rose and Alex Pilibos Armenian School.

Inside Zeytun Grocery & Deli in Hollywood, the heavily laden shelves are crammed with every type of Armenian delicacy and food item imaginable. The freezer is stocked with special ice creams imported from Armenia. Lavash and stone bread are stacked in one corner. Colossal olives and packages of feta cheese line the refrigerated counter up front.

Sam Shoshikiyan opened this small store shortly after he arrived from Armenia in 1989 - a young university student who immigrated with his family. Now 32, he is just one of the hundreds of Armenian business people who for the last few decades have worked quietly in this small nondescript East Hollywood enclave that has been virtually unnoticed by outsiders. But all may be about to change.

Later this month, Los Angeles city officials will hold a ceremony to designate a large swatch of East Hollywood as "Little Armenia," the traditional port of entry for many Armenian immigrants who first started coming to this area in large numbers in the 1970s and '80s.

With the new designation, Armenians are hoping that more people will visit their neighborhood and experience the delicate cuisine and learn more about Armenians. They are also hoping that business, which has been steady over the years, will grow.

"We're very excited about this," said Garry Sinanian, a flower shop owner in the area who pushed for the designation. "We thought that 'Little Armenia' would be a good way to integrate people from every walk of life. This will create better inter-ethnic relations and better tolerance among each other. If you have people coming to experience the culture firsthand, then you will have a better understanding of it."

Emerging from the shadows

When you think of Armenian neighborhoods in L.A., you are likely to think of Glendale, which is better known for its large concentration of Armenians than East Hollywood is. The influx of new arrivals to both areas has been heavy in recent years, as Armenians fled ongoing persecution in their native land and the Middle East.

About 30,000 Armenians now live in Little Armenia, with another 50,000 residing in Glendale, said Gary Khanjian, a real estate broker and chairman of the Hollywood chapter of the Armenian National Committee.

Ironically, Thai Town contains a number of Armenian restaurants and stores along with the jumble of Thai restaurants and marketplaces. Many Armenians were miffed that the Thais, who have not been in Hollywood as long as the Armenians, got their own designation.

"It really did stir up the Armenian community that they had to be more organized," said Claudia Vizcarra-Barton, economic development deputy for Councilwoman Jackie Goldberg, whose district encompasses Hollywood and who was responsible for getting the City Council to approve the special designation. "Before, they felt they didn't want to draw lots of attention to themselves, and then later, they realized this would be very helpful." While the designation does not free up any government funds for community redevelopment projects, it does draw attention to the nondescript East Hollywood area that includes a collection of ordinary mini-malls and traffic-laden streets. The Los Angeles Convention & Visitors Bureau will also help to promote it.

The Thai Town designation earlier this year has already helped the Thai Community Development Center secure some grants to aesthetically improve that area. It obtained two $5,000 matching-fund government grants to build a park and a fountain in what had been an abandoned lot owned by the Metropolitan Transportation Authority. The center also received a grant to purchase four, 6-foot-tall Thai angel statues that will greet visitors at each end of Thai Town. Other projects include building a community center and a Thai American Museum.

Little Armenia could capitalize on its new name and do the same. Or the business owners could agree to tax themselves and form a Business Improvement District, using the assessments to add trees to the streets along with better lighting and other amenities.

Later this year, the city plans to install signs at the various entry points into Little Armenia, which is bordered by Hollywood Boulevard to the north, Santa Monica Boulevard to the south, the Hollywood (101) Freeway to the west and Vermont Avenue to the east.

In Little Armenia, there is nothing particularly exotic or unusual about the architecture except for the scores of signs written in Armenian. Visitors might shop at some of the Armenian grocery stores or visit some of the ethnic eateries such as Zankou Restaurant, a small and modest spot that has garnered rave reviews over the years for its garlicky dishes such as chicken shawerma and shish kebab.

Behind the plastic countertops, two sides of juicy beef rotate in a slow duet on large skewers, and golden glazed chickens twirl in unison inside the rotisserie ovens.

Back in the kitchen, Markrid Iskenderian, wearing a flowered apron, is busy making stuffed grape leaves that are just one of the many Armenian dishes listed on her extensive menu.

Iskenderian, a 70-something Armenian who immigrated from Beirut in 1983 with her family, is the matriarch behind the family's five restaurants in Los Angeles and Orange counties.

She is typical of the Armenians who have worked in this area for decades. When she and her husband arrived, East Hollywood was filled with prostitutes and drug dealers. But years of working 12-hour days alongside a number of other small-business owners to build up the area has helped push out many of the streetwalkers.

"Since we came, the neighborhood has gotten better," the grandmotherly woman said in Armenian.

Now, with Little Armenia being put on the L.A. map, Iskenderian is hoping more people from L.A. and beyond will come see for themselves.