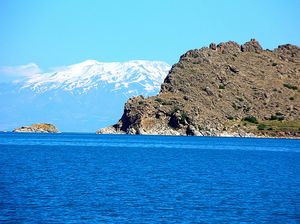 Lies in Western Armenia, todays SE Turkey. The city of Van is in the SE corner of the large lake, with a number of Armenian monasteries along the shores and on the islands in the lake. The most famous island is that of Aghtamar, on the southern shore towards the east. A few kilometers to the SW of Lake Van lies the town of Bitlis, and the province of Mush lies past the west of the region. North of Lake Van was the city of Tondrak, center of the medieval Armenian hippie Tondrakians sect.