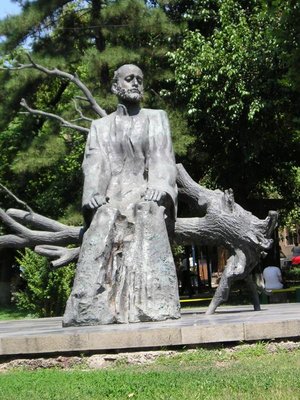 Soghomon (Gevorki) Soghomonyan was born into a music family. At the age of 1 his mother died, ten years later also his father died. His grandmother looked after him until 1881 when a prelate of the local Armenian diocese went to Echmiadzin to be consecrated a bishop. The Catholicos Gevork IV ordered him to bring one orphaned child to be educated at the Ejmiatsin Seminary. Among 20 candidates Soghomon was chosen, entered the seminary (where he impressed the katholikos with his singing talent) and finished it in 1893 when he became a monk. According to the church tradition he was reborn so he was rebaptisted into Komitas (named after a 7th century Armenian hymn writer). Two years later he became a priest and obtained the title Vardapet (or Vartabed), meaning a priest or a church scholar.