Difference between revisions of "Kingdom of Armenia"

The Kingdom of Armenia (or Greater Armenia) was an independent kingdom from (approximately 355 years) 190 BC to AD 165, and a client state of the Roman Empire from 165 to 428. 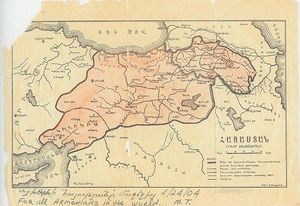 The predecessor of the Kingdom was the Satrapy of Armenia part of the Achaemenid Empire, which later became an independent Kingdom under the Orontid Dynasty with Macedonian influence.

Subsequently, Armenia was often a focus of contention between Rome and Persia. The Parthians forced Armenia into submission from 37 to 47, when the Romans retook control of the kingdom.

Under Nero, the Romans fought a campaign (55–63) against the Parthian Empire, which had invaded the kingdom of Armenia, allied to the Romans. After gaining (60) and losing (62) Armenia, the Romans sent XV Apollinaris from Pannonia to Cn. Domitius Corbulo, legatus of Syria. Corbulo, with the legions XV Apollinaris, III Gallica, V Macedonica, X Fretensis and XXII, entered (63) into the territories of Vologases I of Parthia, who returned the Armenian kingdom to Tiridates.

Another campaign was led by Emperor Lucius Verus in 162-165, after Vologases IV of Parthia had invaded Armenia and installed his chief general on its throne. To counter the Parthian threat, Verus set out for the east. His army won significant victories and retook the capital. Sohaemus, a Roman citizen of Armenian heritage, was installed as the new client king.

The Sassanid Persians occupied Armenia in 252 and held it until the Romans returned in 287. In 384 the kingdom was split between the Byzantine or East Roman Empire and the Persians. Western Armenia quickly became a province of the Roman Empire under the name of Armenia Minor; Eastern Armenia remained a kingdom within Persia until 428, when the local nobility overthrew the king, and the Sassanids installed a governor in his place.