Difference between revisions of "Khorakert Monastery" 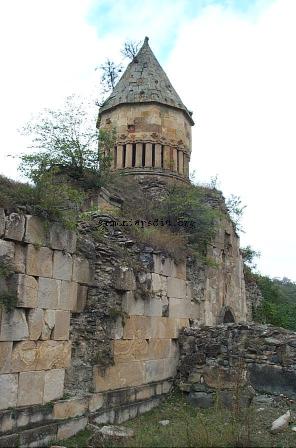 The monument of Khorakert towers well to the north-west of Sanahin Monastery and Haghpat Monastery, on the western slope of Mt. Lalvar, near the village of Jiliza, in Lori Marz, but is in practical terms inaccessible due to the topography of the land and the strategic placement of Georgian border guards in recent years. The once rich monastery was built in a dense forest, among age old trees, and this influenced the distinctive architectural and artistic features of its structures.

The main buildings of Khorakert are the main temple and the vestry which is on the same axis with it. They take up the middle of a plot extended from west to east and encircled with a stone wall. The main entranceway to the monastery is a spacious vaulted premise which has wide arched passageways decorated with half-columns and ornamental carvings.

Within the confines of the wall there have survived remnants of a refectory and two small vaulted chapels with deep apses, as well as traces of foundations of civil buildings. South of the chapels, near the wall, amidst trees, there is a wall connected with a secret passage leading to a gorge.

The main temple is the largest, highest, and the most artistically expressive building of Khorakert, the chief architectural dominant of the ensemble, to which the bulks of the other buildings were subordinated. The temple, dating tack to the end of the 12th and the beginning of the 13th century is an outwardly rectangular and innerly cross-winged domed structure with annexes in the corners of the cross middle. As distinct from similar churches, it is lightly extended in length. The smooth walls of the longitudinal arms of the cross and their greater depth as compared with the lateral arms extend the interior still more, which brings ii close to the interiors of Armenian domed basilicas.

The interior decoration of the main temple is rather modest. The simple frames of the door openings, the triangular niches of the eastern facades with conchs and the three-quarter small columns of the cupola abutments on which the slightly pointed arches of the cupola base rest -- this is all that strikes the eye when inspecting this part of the structure.

The cupola is in sharp contrast with all this, which gives us grounds to presume it was built at a later date, probably simultaneously with the vestry. 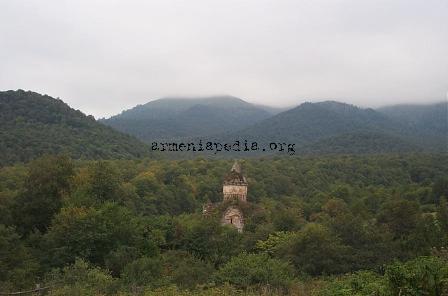 The artistic and structural shape of the cupola is unique not only in Armenian but in world architecture. The drum of the cupola has a decahedral shape, rare in Armenia. which cannot but draw special attention to it. The facets are made not of the usual walls. but composed in the lower half out of hexahedral columns, three per each facet. Identical capitals and bases, having beads and hexahedral plates, are original. Spanned with trefoil and quatrefoil conchs, the spaces between columns serve as light openings, and when bright sunlight pours in, the cupola, looked at from within, seems to soar. This extremely bold treatment of the drum as a colonnade is not to be found in other monuments. The cupola of Khorakert temple is an intermediate link between ordinary cupola and multi-column rotundas used in bell-towers.

The inside of the cupola is also most original. The constructive basis of its hemi-sphere is made up of three pairs of intersecting arches which form a six-pointed star. The central hexagonal section is filled with stalactite-shaped ornaments differing in their delineation, size, and height as if forming another, more graceful and more richly ornamented hemisphere. This roofing was probably inspired by those of the central sections of the chapels of the monasteries of Khoranashat (1257), Arkazan (the 13th century) or Makaravank (before 1207). Nevertheless, this is the only such design among church buildings.

The vestry attached to the temple in 1257 is a rare example of a building rectangular in the plan and roofed with a system of intersecting arches spanning the entire hall. This roofing resembles a temple cupola. Just as in the latter, in the vestry the main emphasis is laid on the central section of the roofing as compared with which the perimetral sections and walls look much more ordinary. The parts of the tent roof, varying in form and arrangement, are framed with sculpturesque braces. The cornice of the transition girth to the octahedral tent-roof is additionally ornamented with two rows of quatrefoils. The same ornament decorates the abaci of the wall-attached abutments. With the main source of light being at the top of the tent-roof, all this creates not only a rich play of light and shade, but also brought this part of the structure to the foreground. This method enabled the architect of the vestry to coordinate the artistic image of the new structure with that of the temple which already existed. 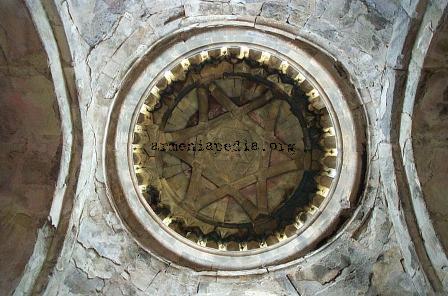 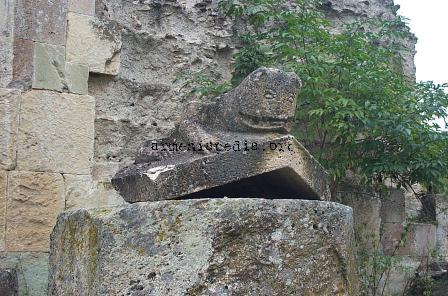 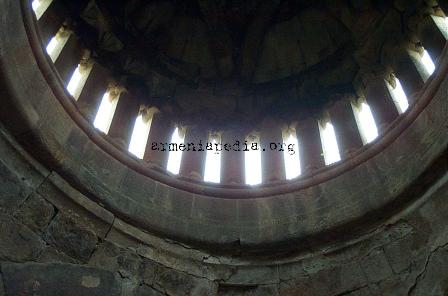