Difference between revisions of "Karen Smbatyan"

He was born into an Armenian family in Gyumri. He Studied at Yerevan Fine Art College after Panos Terlemezyan. He has participated in different international exhibitions. His paintings can be found in Armenian National Gallery, "Modern Art" Museum in Washington, "Richard Manukean" Gallery in Detroit, "Arshil Gorki" and "Gallery Drown" in Paris, "Zimerlin" museum of modern arts in New Jersey, and in private collections in various countries. 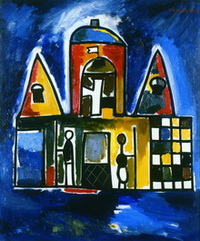 Castle In The Air by Karen Smbatyan, 1994

Throughout his earthly life the diverse and multidimensional artist Karen Smbatyan had to struggle and fight for his internal freedom and external liberty. As a person and citizen he intrinsically chose the path of veracity and truth. He acted with infinite honesty and stepped through life with pride and honour. The destiny of the Armenian people and his national identity have always been equally dominant and imperative as his quest for the hidden mystery of artistic creativity.

The brief of his biography reveals that the artist was born in 1932 in Gyumri. He studied at P. Terlemezyan College, however later he had to quit his studies to join the Soviet army (Estonia, Doko island). While serving in the army he still continues to work and create and his works tracing back to that period have been highly appreciate within professional circles. His artistic biography dating back to the late 50s and early 60s was characterized by Karen's search for lively, everlasting, authentic perceptions of objects through nature, life and human manifestations, adhering to animated means and forms of high realism ("Makuyk" 1954, "The sailor Nikolay Blokhin", 1954, "Ian Paulianki", 1959, portraits).

During 1966-80 he was the editor Of "Pioner" and "Tsitsarnak" children's periodicals. During that period he created the illustrations of "Jelsomino in The Land of Cheaters" and "Jan Polat" folktales by Gianni Rodari and authored the images of the periodicals with demonstrating a new fresh approach in the field. Parallel to that he was very sensitive about self-education and paid a special attention to the study and research of the roots of Armenian stylistic school spending hours in the Matenadaran exploring Armenian miniature hardly concealing his admiration and fascination by the genius of art. (Grigor Tatevaci, Toros Taronatsi).

His diary notes dating back to 1970s reveal that he was particularly concerned with his explorations of problems of color and form, their unimpeded interpretation, the free flow of mind and emotions have become direction of art and artistic belief that transmits expressive means and sacred monumental sonority. The insight contemplations open up inner self and metaphysical thinking of the artist for the viewer ("Shell" 1975, "Amulet", 1977, "Indian jug" 1975).

Having sound and deep understanding and perception of the coloristic achievements of Armenian artists (M. Saryan, H. Kalenc, Minas) Karen makes the color surface of the picture so intensive that it turns into fireworks, spiritual soaring, burning sunset. "The Art is feast of colors," he cites the idea of Delacroix which means that it is not the plot that should dominate the picture. This refers to all genres as well as to free compositions ("Varuzhan Vardanyan", 1983 "The portrait of Mshetsi", 1989, "The Garden", 1994, "Autumn", 1999).

This powerful rise of this manifestation of his creativity is an ode to the love for the nature, philanthropy. In the picture the leitmotif is the light, the solar warmth is "the peace of soul". ("The quay. Sevan", 2003, "Noonday", 2005, "Northern sun", 2006).

The simplicity of composition the completeness of the style, the seeming lack of attention for detail have been the most attractive elements of the last two decades, which allowed the artist to achieve monumental sonority. From point of view "The most luxurious luxury is simplicity" or "The painting is complete only when the unnecessary things ara removed".

Penetrating and tens, especially by inner clairvoyance characteristic of an individual, he has discovered and reveled-within himself, not from the outside. Other architonic coatings, achieving an apocryphal level where the artist exposes spirited characters and objects, vital in everyone, both indigenous and common to all mankind. Only big artists can see them and show them. On the other hand the inner world is resuscitated and made viable by the robust power of potential individuality, represented as a whole image due to the brilliance and energy of an artist named Karen Smbatyan, who has acquired the gifts of nature so abundantly. Ilya Kabakov Painter, Moscow 1976