Difference between revisions of "Karahunj" 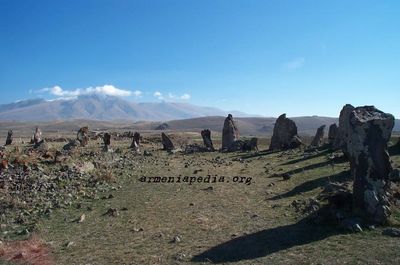 Carahunge or Karahundj, Zorakarer is 3, 500 years older than England’s Stonehenge and 3, 000 years older than the Egyptian pyramids. The total area of the observatory is 7 hectares. According to the scientist’s findings, a temple consisting of 40 stones built in honor of the Armenians’ main God, Ari, meaning the Sun, is situated in the central part of Carahunge. Besides the temple, it had a large and developed observatory, and also a university that makes up the temple’s wings.

"They sit like soldiers on a hill, huddled in formation. The 204 stones near Sissian have been ascribed with mystical, fertility and cosmic powers, but rarely have ancient monuments caused such a sensation in astronomical circles. " [1]

Also known as Karahunj, Angelakoth, and just Zorakar, the ancient monument of Zorakarer is an equivalent to England's Stonehenge, only older and cruder.

All Armenia, and especially the mountainous region of Zangezur, is rich in beautiful remains of prehistoric times. In the various regions of the province of Sisian are found many megalithic monuments, which are among the oldest structures in stone. Examples of this megalithic culture are the dolmens and the arrangements of menhirs at Angelakoth which belong to the second millennium B.C. (this paragraph is from the book, "Monuments of Armenia".)

Leaving Sisian on the road NNE from the center of town, climb up the hill, then turn hard left where you see the rusting steel umbrellas. This road will lead you in a couple of km to Zorakarer*, a Bronze Age settlement/cemetery site left of the road, around whose large chamber tombs are a series of standing stones, some with holes pierced in them. It is universally assumed that this is an early observatory, though the alignment is not ideal for the purpose. In any case, the site is beautiful and ancient, well worth the visit. (this paragraph is from the Rediscovering Armenia Guidebook.)

The Armenian scientists of old, during the time of Carahunge, could accurately measure latitude; knew that the Earth was ball-shaped; that its radius was equal to 6300km; had an accurate calendar, etc). These scientists also planned and were involved in the implementation of other well known ancient Monuments, such as the Great Pyramid in Egypt (3000 years “younger” than Carahunge); Stonehenge in England (3500 years “younger”); and others. Many of these Monuments retain until now, a link with the original Armenian name, e.g. Stonehenge, which has the same connotation as Carahunge, because “stone” in Armenian is “kar” and “henge” (a word which is absent in English) is the same “hunge” (voice, sound, echo in Armenian).Another example is Callanish in Scotland (Luis island in North Gebrids), because “kal” = “car”, “nish” in Armenian is “sign” and Luis is “light”. The same principle applies to the name given to the standing Stones in Carnac in Brittany (France), in Egypt, etc.Finally, it must be very interesting to our readers that many of the world’s well known ancient Monuments were built in definite and equal latitudinal distances from Karahunge. For example, the latitude difference between Karahunge and Stonehenge is about +10°; Karahunge and the Great Pyramid is about –10°; between Carahunge,Kallanish and the oldest Egyptian observatory and Temple of the Principal God RA (AR), near present Assuan, is ±16°.Armenian scientists of old knew mathematics, geometry, written language, astronomy, philosophy, etc. There were laws and order in existence, and Armenia was a Kingdom with dynasties. [2]