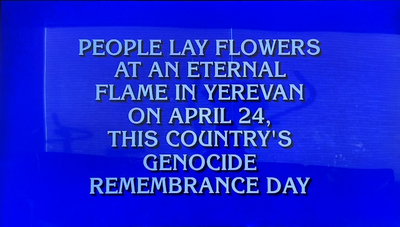 Jeopardy has had a number of Armenia related questions over the years, including questions about the genocide, lavash, and what country Levon Ter Petrossian was the president of in the 1990s.

CULVER CITY, Calif. – Every once in a while, questions pertaining to Armenia pop up in the daily television game show “Jeopardy!” produced by Sony Pictures Studios. On January 9, host Alex Trebek gave the clue that “its provinces include Aragatsotn and Ararat,” and high school teacher Matt Brannagan, a contestant from Bowie, MD, quickly responded “what is Armenia” to win the point.