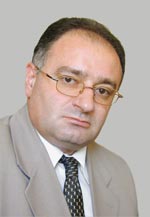 Mr. Karapetyan graduated from the Khatchadur Abovyan State Pedagogical Institute in 1985 and did his postgraduate studies there. He is a teacher and psycholo­gist. He was awarded a Marshal Baghramyan Medal in 2002.

From 1980-1981 he was a worker in the Yerevan Electrical Bulb Factory. From 1985-1987 he was a teacher in Nor Geghi Secondary School. From 1987-1990 he taught in Yerevan Secondary School # 181. From 1987-1989 he was the editor of Zangakatoun periodical under the Miatsoum Organization. From 1990-1995 he was a member of the Central Committee of the Armenian Revolutionary Federation Party in Armenia. From 1990-1992 he took part in the defense of Getashen, Shahoumyan and Berdadzor. From 1996-1998 he was a member of the Executive Council of the Armenian Revolutionary Federation. For the next five years he was the regional governor of Ararat.

Mr. Karapetyan is married and has three children.