Difference between revisions of "Hratch Yervant"

Born May 21, 1885 in the Soorp Garabed section of the city of Kharpert to Haroutyoon and Margaret Khachadourian Yacoubian.

After a short period at Armash, he departed for New York in 1903.

Graduated from Boston University Law School in 1912 and is one of the first Armenians to pass the Massachusetts Bar Examination. He then returned to Constantinople.

On the morning of April 24, 1915 in Constantinople, Hratch Yervant accidentally ran into the acclaimed Ottoman parliamentarian, lawyer and writer, Krikor Zohrab, and they greeted each other. In the evening, while at a friend's house, an Armenian came to tell Hratch Yervant that there were secret police in front of his hotel. He left his friend's house and headed towards the hotel to inquire. He wisely walked on the opposite sidewalk, and upon noticing from a safe distance that the hotel was under surveillance, returned to his friend's house. The friend kept him in his shop for several months. In September 1915, with the assistance of U.S. Ambassador Henry Morgenthau, he departed for Boston.

Joined the renowned poet Hovhannes Toumanian on the same stage at a program in Constantinople, encouraging Armenians to maintain their faith and confidence in Armenia, despite the impending downfall of the First Republic of Armenia (1918-1920).

Six leaders, including Hratch Yervant, signed the document in 1921, which formally merged and established the Ramgavar Azadagan Goosaktsootyoon [Armenian Democratic Liberal Party] in Constantinople. Elected the first chairman of the A.D.L.

In the mid and late 1920's, Hratch Yervant was the A.D.L. representative negotiating with the opposition political faction so that they would end their anti-Soviet Armenia campaign and cooperate with the other Armenian organizations in rebuilding Soviet Armenia and the Middle Eastern Armenian communities.

Editor of numerous Armenian newspapers throughout various stages of his life including Tsayn Hayrenyatz in Boston at age twenty-two, Bahag in Boston and then Providence, Jhoghovoortee Tsayn in Constantinople, Oror in Fresno and Abaka in Paris. He is most remembered as the long-time editor of the Baikar daily newspaper in Boston. 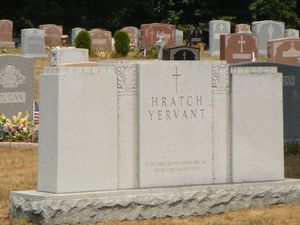 The most prominent leader of the Armenian Democratic Liberal Party to have lived a major portion of his life in the United States.

Commissioned by the founder of the A.G.B.U., Boghos Nubar Pasha, in 1927 to travel to the Far East, and help advise and strengthen the Armenian communities of India, Burma, Singapore, and Indonesia.

Died September 12, 1968 in Jamaica Plain, Massachusetts inside of Boston. Buried at the North Burial Grounds in Providence, Rhode Island.

Credit for above text: Carl Bardakian

In the forest all the animals were sad

For the giant oak had fallen.

As it must to all men, death came on the evening of Thursday, September 12,1968 to Hratch Yervant, Armenian patriot and literary leader. Ironically, his passing came on the eve of the 48th Annual Convention of the Armenian Democratic Liberal organization, which he had served in so many capacities since its beginning.

Hratch Yervant was born 83 years ago in Kharpert, son of Harutiun and Margaret Yacoubian â€“ he was christened Nishan â€“ and attended the famous Tlgadentsi School there. He also attended the Seminary at Armash, then under the direction of Archbishops Malachia Ormanian and Yeghishe Tourian.

First coming to the United States in 1903, Hratch Yervant attended Boston University graduating from the Law School in 1912, one of the first Armenians to achieve that distinction in this state. He successfully passed the Massachusetts Bar Examination but instead of taking up the practice of law he went with the late Dr. Hovhannes Zovickian to Constantinople as a delegate to the convention of the Reformed Hunchakian Party, of which he was a member. He stayed in Turkey after the convention, traveling through the Armenian provinces in the eastern part of the peninsula and going to Armenia itself. He returned to Constantinople just before the outbreak of World War I.

Hratch Yervant escaped the fate of the other Armenian intellectuals on the infamous April 24, 1915 because some friends were able to hide him from the Turkish assassins. Later that year, with the aid of the United States embassy, he was able to flee from Turkey and return to America.

In this country he settled in Fresno, where he became editor of the weekly newspaper, "Oror," the organ of the Reformed Hunchakian Party, later of the Azadagan Party. (It was later to be merged with "Nor Gyank," the ADL organ in California, to become the present "Nor Or.")

He was also instrumental in the founding and early history of the Armenian Students Association.

From 1929 to 1933, Hratch Yervant edited "Abaka," the ADL weekly in Paris. Following a trip to the Far East on behalf of the Armenian General Benevolent Union, Hratch Yervant settled in Boston, where he became secretary of the ADL District Committee and then editor of the Baikar Armenian daily, in which position he was to serve until his retirement in 1960.

He was the author of countless articles and pamphlets on all phases of Armenian affairs. He was the founder and for many years chairman of the ADL Veterans Fund.

His Eminence Archbishop Torkom Manoogian, Primate of the Armenian Church of America, assisted by the Rev. Fr. Papken. Maksoudian, Rev. Fr. Arten Ashjian, and Rev. Fr. Haik Donikian, presided at the funeral services held at the Holy Trinity Armenian Church in Cambridge, MA. A eulogistic service followed in the Cultural Hall with Antranig Antreassian, who succeeded Hratch Yervant as editor of Baikar, and Dr. Nubar Berberian, the incumbent editor, as the eulogists. Interment was in the North Burial Grounds in Providence, RI.

Surviving are three nieces, Mrs. Araxie Chakarian and the Misses Victor and Anahid Vorperian, and a nephew, Hratch Vorperian, all of Paris. And, of course, the entire Armenian people.