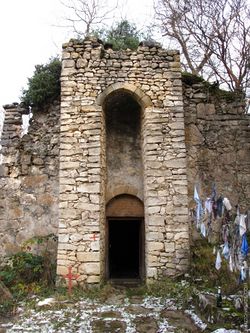 Glkho or Horeka temple in Martakert region of Karabakh, near the town of Talish.

Kaghankatvatsi's given more or less certain information about Glkho temple is as follows.

While propogating enlightment activities in Aghvank Mesrop Mashtots had a sacred cross with him. When he learnt that he was followed, he buried the cross un Gis. Uti region's this famous village was the first Christian preachment place of eastern Armenian side. The church here was considered the first sacred construction in whole eastern Transcaucausia, built by Yeghishe apostle in 1c. While describing the dicovery of the sacred cross in this church and the ceremonies connected with it the historian tells such concrete information, which concersn Gis' directly neighboring goegraphical spot Glkho temple in Metskaghmank village. If the author of manuscripts place Gis between Kur and Tartar rivers, towards werst from Parsav, then Glkho or Horeka temple's place is somewhat clear, it is situated in western side of Martakert region's village Talish, on the northern slope of the mountian rising in the thick forest.

Like hundreds of other monasteries of Horeka district, monastery Glkho has many a times been devastated by campaigns of foreign invaders. But, as the narrative sources and epigraphic inscriptions evidence, the monastery has been rebuilt and repaired not once. The complex consists of a church, chapel, large cemetery and other destroyed buildings. The church and the vestibule have simple and modest architectural solution. The walls are built from chipped limestone, only the entries and windows have trimmed-stone framing. The church is a one-nave hall with vaulted cover, directly leaning on walls, and covered with a gable roof. The rectangular praying-hall has a rather archaic and unusual form, as the square apside, in the depth of which there is an ancient burial-vault, is already higher than the hall. It occupies approximately half of the hall, has stairs in both sides. We can see that while rebuilding in XIIIc before the architect stood a difficult poblem: to preserve the burial –vault of the ancient church as much as possible, which means to create over the remaining whole part an architectural construction, analogous to the previous one. In fact, the church was rebuilt while preserving the remaining parts of Vc apside. Unfortunately in other parts of the construction ancient architectural forms have not preserved. Part of the ornamented friezes and capitals of the early period were used as usual building material. Partly had preserved the ancient burial vault, where was buried the sacred cross, which had brought Mashtots.

On the square-beam of the entry in half-arch shape there is a building inscription, in which are mentioned the builders (perhaps repairers) Hovanes and priest Stepanos. The church was repaired in 1279. The same Hovanes, according to the inscription in 1284 built also the vestibule, which is almost a square hall (sizes 7 x 7,7m), the crossed vault-arches of which, as in many analogous Armenian monuments, lean on walls. The vestibule at the same time serves as the burial-vault of episcops, precepters and deacons of the monastery. The gravestones are processed with true artistic taste, are covered with ornaments and inscriptions. the belfry was built in XVIIc. This small unpretentious building joins the vestibule from its northern side.

In the walls of the church and the vestibule are put numerous khachkars, some of which are used as bridges of window-passages. Besides, over tens of khachkars of XIIIc and following years are scattered in the northern part of the monastic yard. On this monuments are pictured riders, priests, musicians, various domestic scenes, geometric and vegetable ornaments.

In the large cemetery of the monastery has preserved a destroyed burial-vault, where are put two large smooth stones.

Generally the monastic cemetery stands out by richly ornamented gravestones, covered with relief pictures. As comparatively new so the old gravestones are 2 and more meters long and 1m wide. Here is used the local and brought from other places stone. Among others stand out gravestones of national liberation movement’s participants. To the unique works of carving may be referred gravestones of Sarukhan-bek, prince Hovsep, prince Beglar, brave Ter Mkrticht (Keshish oghli), general Shamir-khan. As is known, Shamir-khan was the staff-officer of Yermolov’s Russian army, and later on he was the secretary and interpreter of Griboyedov in Persia. This famous son of Armenian nation, descending from Talish, was the participant in arranging and signing Gyulistan pact in 1813.

Monastery Glkho or Horeka is surrounded with serf-walls, where remain numerous whole and half-destroyed buildings, known among people by Paterin tak name.