Difference between revisions of "Harutyun Gharagyozyan" 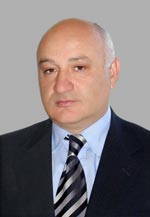 Haroutyun Gharagyozyan, better known as Harut or Caramel Harut was born on May 1, 1959 in Yerevan.

From 1985-1990 he worked first as an economist and later head of stores in the Haykhoghovakar Department. From 1992-1993 he was the general director of the Haymetaghar Company. From 1993-1995 he was the director of Yerevan Sweets and Pasta Factory. The next four years he was the president of Hayhroushak OJSC.

From 1990-1995 he served as a deputy of the Supreme Council (electoral district # 4) and was a member of the Republic Deputy Group.

From 1995-1999 he served in the NA (electoral district # 4) and he was a member first of the Republic Faction and later the Yerkrapah Deputy Group.

1999-2003 was his second term as a deputy of the NA (electoral district # 23) and he served on the NA Standing Committee of State and Legal Affairs and was a member of the Unity Faction.

On May 25, 2003 he was reelected to the NA from electoral district # 12. He is cur­rently on the NA Standing Committee on State and Legal Affairs and is a member of both the Republican Party of Armenia Faction and party.

Mr. Gharagyozyan is married and has two children.