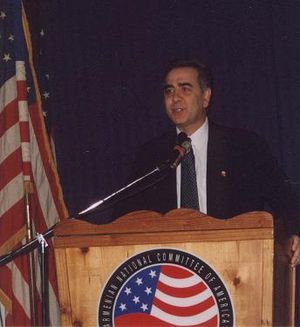 Harut Sassounian, the publisher of The California Courier newspaper, is the President of the United Armenian Fund which has shipped $460 million worth of humanitarian assistance to Armenia since 1989. He is also the Vice Chairman of The Lincy Foundation which has funded $230 million worth of infrastructure projects in Armenia and Artsakh. He worked for Procter and Gamble in Geneva, Switzerland, as an international marketing executive from 1978 to 1982. He served for 10 years as a non-governmental delegate on human rights at the United Nations in Geneva, playing a key role in the UN recognition of the Armenian Genocide in 1985. He has a Masterâs degree in International Affairs from Columbia University (NY) and an MBA from Pepperdine University. His book, âThe Armenian Genocide: The World Speaks Out, 1915-2005, Documents and Declarations,â published in 2005, was republished in Arabic translation in Lebanon in 2006. He has been awarded the âAnania Shiragatsiâ medal of honor by the President of Armenia and has received numerous other awards for his leadership and community activities.

Sassounian's popular weekly opinion column is widely printed across Armenian press. Published in California State of the USA. An Armenian activist and lobbyist.

Archives of all the Sassounian columns available to me.