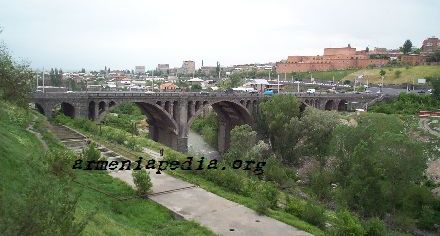 The Hrazdan River is crossed by the three-span Haghtanak Bridge (Victory Bridge), built in 1945 and named in honour of the defeat of the nazi invaders. It is 200 metres long, 25 metres wide and 34 metres high. It was designed by engineer Simon Ovnanyan and architects Artashes Mamadzhanyan and Ashot Asatryan. The bridge links the city with the Ejmiatsin highway, the Kilikia Bus Station and Zvartnots International Airport. In 2005 Victory Bridge was closed for renovation. It was rumored that a large crack was discovered in the structure prompting the closure.