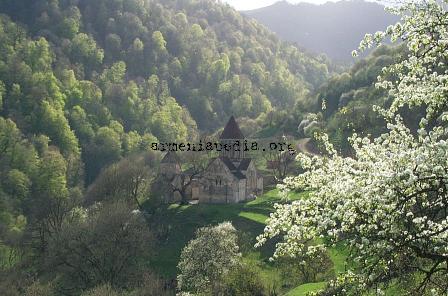 Haghartsin Monastery from opposite slope.

Haghartsin monastery is nestled in a temperate rainforest on a mountainside. It is one of those spots in Armenia that feels like you are walking through a huge, unreal movie set. When we arrived in August it was great weather and even though it was in the middle of the day there was mist hanging about making the setting so scenic that even without the monastery it would have been breathtaking. The first warning of the approaching monastery is a small cave-like building and some khatchkars on the left of the road, as you heading down a steep mountainside with another mountain opposite to you, way off to the left. You continue for about another two minutes where you can see the roofs, then the road makes a sharp steep semicircle, and you have arrived at the main complex.

The combination of natural and architectural beauty is very impressive, and most visitors to Armenia do not ever see it. There are three main buildings still standing. Two to the left, and one to the right. The caretaker lives in a small house with his family down a short path from the monastery, you must get him to open the doors if he is not there. Very few people were around which was both sad and nice. He opened the doors and led us around, also allowing us to wander at will. The building immediately to the left was a large hall. Its distinguishing characteristic is the impression you receive when you walk in that it is much bigger than it really is. It is otherwise rather simple and contains many tables and chairs made of huge logs which I would image are for present day weddings or lunches. Past that the two churches are beautiful. The size, proportions, detail, carvings, etc all seem perfect. You can wander around a ruined building, explore the plants and have a nice lunch. -Raffi Kojian

After lunch we set off to explore. First we headed past where the road ended to see a cave our month long guide had lived in for a week of his youth. Then we backtracked to see the little cave like building by the road, which is just back up the road where you came from.. A bit further down the side of the mountain and further from the church there was an incomplete three story building that had been abandoned. A few of us made it out to that building and looking down at the great drop over which we had to jump once or twice made our way to the opposite side where we were treated with a truly glorious view of the entire monastery complex nestled on the mountain. This is one of the nicest views I have seen. On the road to and from Haghardzin we passed through Dilijan, the one of the most picturesque and architecturally traditional towns in Armenia. 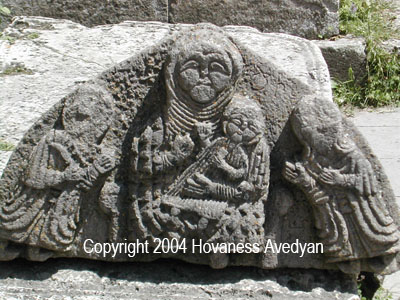 Stone carving of Madonna and child near door to Surp Astvatsatsin.

In the upper reaches of the Agstev river, there are Haghardzin and Goshavank, the monastery ensembles of the Dilijan district. They are situated in dense oak woods, in the gorges of small but turbulent mountain rivers. The local terrain and scenery determined the compositional peculiarities of these ensembles. Neither Haghardzin, nor Goshavank have walls, and their structures are surrounded with verdure and peasants' homes, some being a rather long distance away from the main temples of the ensembles.

St. Astvatsatsin Church in Haghardzin (1281) deserves special mention. This is the biggest building of all, the artistic dominant of the ensemble. The tall sixteen-faceted dome, dominating all the other structures, is decorated with a graceful arcature, the bases of whose columns are connected, by means of triangular ledges and spheres, with the band around the drumâs bottom. This adds to the optical height of the dome and creates the impression that its drum is weightless. The platband of the southern portal is framed with rows of trefoils, arranged in depth, which give it a picturesque look.

The interesting sculptural group of the churchâs eastern facade differs in composition from the similar bas-reliefs of Sanahin, Haghpat, Harich, etc. It shows two men in monksâ attires who point with their hands at a model of a church and a picture of a dove with half-spread wings placed between them. The umbrella roofing of the modelâs dome gives us grounds to presume that it shows the original look of the dome of Astvatsatsin church. The figures are shown wearing different dresses â the one standing right is dressed richer than the one standing left. The faces, with their long whiskers, luxuriant combed beards and large almond shaped eyes, are also executed in different manners. These are probably the founders of the church, the Father Superior and his assistant.

The vestries of the monasteries belong to the most common type of premises square in the plan, with roofing supported by four internal abutments. Both buildings have squat octahedral tents above the central sections, which bring these two structure close to the Armenian peasant home of the "glkhatun" type. Goshavanks vestry has small annexes in the corners of the eastern side of the building, while Haghardzin vestry has ornamented corner sections. Decorated with various rosettes, these sections contain sculptures of human figures in monks' attires, carrying crosses, staffs, and birds. The framing of the central window of Haghardzinâs vestry is cross-shaped. Placed right above the portal of the main entrance, it emphasizes the central part of the facade. 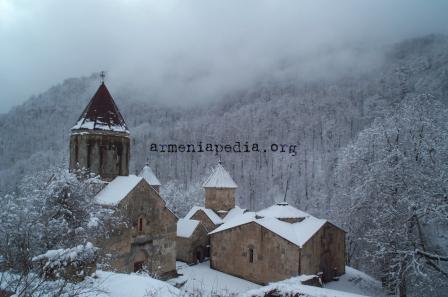 Haghartsin Monastery in the snow

The refectory of Haghardzin, built by the architect Minas in 1248, is a structure of a rare composition. Just as Haghpat's refectory, the structure is divided by pillars into two square-plan parts roofed with a system of intersecting arches.

The walls are lined with stone benches, and at the western butt wall, next to the door, there is a broad archway for the numerous pilgrims to get in and out. Decoration is concentrated only in the central sections of the roofing. near the main lighting apertures. The transition from the rectangle of their base to the octagon of the top is decorated with tre- and quatrefoils of various sizes creating a rich play of light and shade. The low abutments determine the size of the upstretched arches. The proportionally diminishing architectural shapes create the impression of airiness and space.

Among the memorial khachkars of Haghartsin and Goshavank there are unique and highly artistic ones. Of interest is the ornamental carving of a thirteenth-century khachkar placed next to the southern door of St. Astvatsatsin church in Haghardzin. The khachkars created by the carver Pavgos in Goshavank stand out among the rest. The best of them is a 1291 khachkar with the makerâs name carved in the bottom left star. This is a unique and highly artistic work. The finely carved lacy ornaments are arranged in layers in which the basic elements of the composition â a cross on a shield-shaped rosette and eight-pointed Starr flling the corners of the middle-cross sectionâshow clearly. The intricate openwork ornaments vary â a clear-cut geometrical pattern constitutes the background, and the accentuating elements form a complicated combination of a floral and geometrical ornament which never repeats itself. 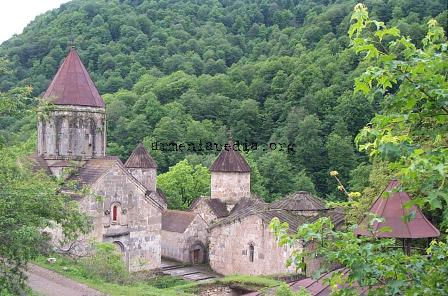