From armeniapedia.org
(Redirected from Gurgen Markarian)
Jump to: navigation, search 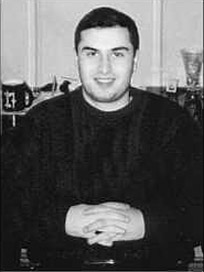 Killed by Lt. Ramil Safarov in Budapest on February 19, 2004. Twenty-six year old Gurgen was axed to death in his sleep during a NATO program. Both were officers participating in an English-language course at the Hungarian University of National Defense as part of NATO's Partnership for Peace (PfP) program. Ramil Safarov was a member of the Azerbaijani delegation.

Gurgen Markaryan was born on September 26, 1978 in Yerevan, Armenia. He attended school #122 in Yerevan for his secondary education, and then proceeded to graduate from Armenian State Engineering University with a bachelors degree in Engineering.

Following the completion of his mandatory military service, Gurgen became a commissioned officer with the rank of lieutenant in the Armenian Defense Ministry.

Lt. Markaryan departed for Budapest, Hungary on January 11, 2004 to participate in a 3-month long english-language course, as part of the "Partnership for Peace" program sponsored by NATO. 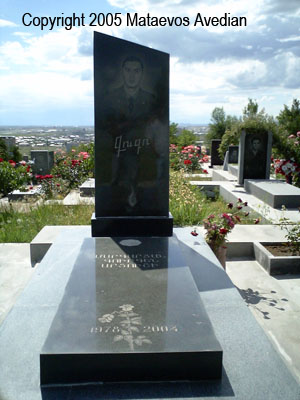 Tomb of Gurgen Margaryan at Yerablur Veterans Cemetery in Yerevan

On the morning of February 19, Gurgen's roommate Balash was woken by a light in the room. As he rolled over he saw Ramil Safarov standing over Gurgen's bed with a long Axe in his hands. Balash later said, “By that time I understood that something terrible had happened for there was blood all around. I started to shout at the Azerbaijani urging him to stop it. He said that had no problems with me and would not touch me, stabbed Gurgen a couple of more times and left. The expression of his face was as if he was glad he had finished something important. Greatly shocked, I ran out of the room to find help, and Ramil went in another direction”.

AZERBAIJANI OFFICER SENTENCED TO LIFE IMPRISONMENT FOR MURDERING ARMENIAN. A Budapest district court on April 13, 2006 sentenced Lieutenant Ramil Safarov to life imprisonment for the "premeditated, malicious, and cruel" murder in February 2004 of Lieutenant Gurgen Markarian, an Armenian fellow participant on a NATO language-training course, dpa reported. Safarov will be eligible for parole after serving 30 years of his sentence. In Baku, the Karabakh Liberation Organization staged a demonstration on April 14 to protest the verdict, day.az reported. Some 100 students tried to stage a similar protest in Baku on April 17, but were forcibly prevented by police who briefly detained up to 50 of them, day.az reported the following day. The Azadliq opposition bloc released a statement on April 15 terming the verdict unjust in light of Safarov's youth and the fact that members of his family died in the Karabakh war, but warning at the same time against feting Safarov as a hero, day.az reported on April 17. LF

Budapest Case - information about the murder of Gurgen Margaryan, including eyewitness' testimonies.