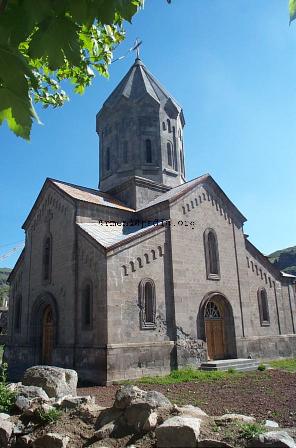 Nestled in a bowl of green hills and mountains, with interesting formations and many previously inhabited caves in them, Goris has some of the nicest overall Armenian architecture in Armenia. Somehow the traditional methods have been preserved overall in this town, while everywhere else the Soviet blueprints seem to have overwhelmed historic designs.

"The small town of Goris lies in the middle of Armenia in the province of Zangezour. It is famous for its thousands of dwellings carved into the rock. In 401 BC, during the retreat of the Ten Thousand (Anabasis), Xenophon passed through Armenia. In his account of the expedition he mentions the Armenian troglodytes of Khndzoresk and Goris." -moa

Coming from the West, turn right just before the bridge to enter the town of Goris (15742 v.), which sprawls out along the gorge of the Goris River. Its hotel, partly occupied by refugees, has a poor reputation. Goris is home to the Axel Bakunts house museum, commemorating one of Armenia’s great prose writers, who died in prison in 1937, one of many who paid the price for “nationalist deviationism.” There is a regional museum as well. At the beginning of the road to Khndzoresk is an 18th c. local melik’s house. Goris is famous for its home-made fruit vodkas, and for the medieval cave-dwellings carved out of the soft rock in the southern part of town. There is a modern church. (This paragraph is from the Rediscovering Armenia Guidebook.)

Goris Hotel has rooms for 4,000 a night regular, and 6,000 a night deluxe (half price for locals). The deluxe rooms have a sitting room, and are nicer, but still no running water at any time. They bring buckets of hot and cold water at your request. The top three floors of this 6 storey building has refugees from the war, and sometimes the kids are rowdy. Notes: No toilet seats, toilet paper & towel is provided.

These are Armenians who were born or who have lived in Goris: