Difference between revisions of "Gesaria" 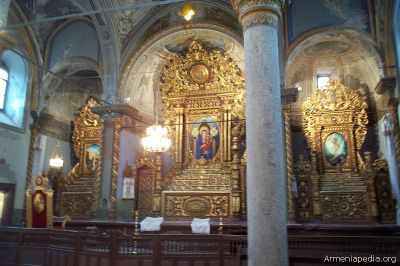 One Armenian Church reopened in recent years, though there are no Armenians left.

Another church, Surp Astvadzadzin Armenian Church is being converted into a public library.

Sinan, the famous Ottoman architect was born a Christian in Anatolia in a small town called Ağırnas near the city of Kayseri, either of Greek or Armenian origin. In 1539, Sinan personally intervened on the behalf of Kayseri Armenians who had been ordered by Ottoman Sultan Selim II to be exiled to Cyprus. Sinan wrote a petition to Selim to belay the order, and the Sultan agreed to offer the Kayseri Armenians a general pardon.[1]

A group of Armenian men are photographed standing under Turkish guard in front of a building in Gesaria (Caesarea) in 1915. The building is a prison and the men, most of whose names are listed under the photograph, will soon be taken away and murdered, early victims of the genocide of the Armenians committed by the Ottoman Empire. Who took this photograph and why? Who were these men and how did they die? What became of their families?

Stephen Kurkjian, Pulitzer Prize-winning investigative reporter for the Boston Globe and the son of a survivor of the Armenian Genocide, has spent the past year researching this photograph trying to answer these questions. He will present his findings in an illustrated lecture entitled "Kiss My Children's Eyes: A Search for Answers to the Armenian Genocide Through One Remarkable Photograph" on Thursday, November 10, at the National Association for Armenian Studies and Research (NAASR) Center , 395 Concord Ave., Belmont, MA.

The photograph Kurkjian has investigated is extraordinary as it is one of the very few which have emerged from the Genocide which show identified Armenian men during what was essentially a death march. Yet it has never been researched-until now. Using his skill as a reporter and the historical documentary resources available to him, and with the assistance of Project SAVE Armenian Photograph Archives and the research assistance of Dr. Vahakn N. Dadrian, Director of Genocide Research for the Zoryan Institute and renowned genocide scholar, Kurkjian has unraveled some-but not all-of the mysteries of the photograph.

Kurkjian's approach, which combines the skills of the historian, the detective, and the semiotician, focuses on the microcosm of this single photograph to find a unique window into the macrocosm of the destruction of the Armenians of the Ottoman Empire.

Admission to the event is free (donations appreciated). The NAASR Bookstore will open at 7:30 p.m. The NAASR Center and Headquarters is located opposite the First Armenian Church and next to the U.S. Post Office. Ample parking is available around the building and in adjacent areas. The lecture will begin promptly at 8:00 p.m. and interested parties are strongly encouraged to arrive early as space is limited and a large turnout is anticipated.

There are continuing reactions of Muslim circles to the anti-Islam caricatures published by an irresponsible magazine in Denmark. These reactions are bearing down on the diplomatic missions of many western countries. There have been incidents like the murder in Trabzon of the Catholic priest Andrea Santoro, the assault in Izmir on the Catholic priest Martin Kmerec, and the slogans written in Istanbul on the walls of two Christian churches. Demonstrations now continue against the west and against Christianity.

According to information relayed to the Armenian Patriarchate by members of the tiny Armenian community in Kayseri, unidentified persons appeared with a weapon in front of the Armenian Church of St. Gregory the Illuminator in Kayseri and fired ten times into the outer door.

The Governor of Kayseri, Osman Gunes, immediately established security precautions in the area of the Kayseri Armenian Church and put officers on duty in the church courtyard.

His Beatitude Mesrob II, Armenian Patriarch of Istanbul and All Turkey, made known his distress over these developments as follows. "It is the most natural right of Muslim believers to express their outrage over the provocative caricatures published in Denmark, but I cannot understand the use of violence against the worship places of Christian citizens of our country. Whoever has done such a thing has behaved in a deviant, unacceptable, and senseless way; it is a crime, and people can later interpret these types of attacks in a very different way. Every sort of violence is unjustifiable, wrong, and to be condemned!"

ON THE KAYSERI CHURCH INCIDENT

On Thursday afternoon, 16 February 2006, His Beatitude Mesrob II, Armenian Patriarch of Istanbul and All Turkey, communicated with the Security Chief in the Department of Security in Kayseri, in order to obtain full information about the shooting into the door of the Armenian Church of St. Gregory the Illuminator in Kayseri.

According to information obtained from the Kayseri Security Department, the event occurred last weekend. Only one resident of the street where the church is located heard the sound of a weapon. It was determined that it was not a revolver but a hunting rifle that was used, and experts found six bullet marks spread on the church door. None of the residents heard the shouting of "Allahu Akbar" or any sort of anti-Christian slogan. According to security officers, the Cafer Bey neighbourhood where the historic church is located is one of the slum neighbourhoods in the region where this sort of event often occurs.

Subsequent to the Armenian Patriarchate's 15 February 2006 press bulletin, which was headlined, "Attack on the Kayseri Church," the Governor of Kayseri issued a written explanation as follows:

"There has been no incident of any kind directed toward the Armenian Church of St. Gregory the Illuminator, which has been active in our region for centuries.

"On 9 February 2006, there were six rifle bullet marks found in two places on the entrance door to the church. But just as it cannot be determined when this event happened, there is also no evidence or information relating the finding to the current caricature crisis.

"On the day of the press conference of 10 February 2006 concerning the caricature crisis in our region, importance was given to security precautions around the church in order to prevent any sort of provocation.

"In a meeting with the Church Council, the Chairman declared that for years there has been no threat or protest against them of any sort, and also not now in relation to the caricature crisis.

"Everything the church has done has been met with tolerance by our citizens, who have helped the church in every way. Utmost sensitivity must be shown so as not to give a chance to these types of incidents. --released to the public on 16 February 2006."

His Beatitude Mesrob II, Armenian Patriarch of Istanbul and All Turkey, thanked the Kayseri Governorship and all security units for their interest and made a statement as follows:

"The concern and attention shown by the officials in this case has touched us. It is gratifying to learn that the incident in Kayseri is not connected with the artificial crisis created in response to the caricatures that were published in western European countries and that caused justifiable outrage in Islamic communities throughout the world.

"However, officials have confirmed that the church entrance was fired on, whatever the reason. Now, this is not normal thing in our country; people do not usually fire guns at the doors of houses of worship. I know of no such incident that has occurred at least during the last 25 years. Why does it happen now?

"Hence, we have to admit the fact that the person or persons who committed this crime have wished to convey a clear message.

"I hope that this and similar incidents will not occur again, and I believe that efforts at dialogue between religions and cultures in these days will acquire greater importance."

Around 250 thousand signatures have been collected in Kayseri, where Turkey's president Abdullah Gul's was born, against opening of the Armenian-Turkish border.

According to the "Hurriet" daily, hundreds of thousands signatures collected during the campaign organized by the Turkish nongovernmental Turk Egitim - Sen organization entitled "Let not open the border with Armenia: I don't want to see in my town my brother's killer," will be submitted to the parliament of the country.

Armenians who were born or who have lived in Gesaria:

Armenians who's ancestors are from Gesaria: