FOURTH PAN-ARMENIAN GAMES TO BE HELD ON AUGUST 18-26 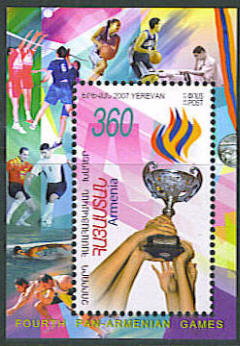 A total of 2500 sportsmen from 94 cities of the world will take part in the Fourth Pan-Armenian Games, which will start on August 18, Vardan Oskanyan, Armenian Foreign Minister and Chairman of the World Committee of the Pan-Armenian Games, told journalists, Thursday.

Sportsmen from 67 cities of the world participated in the previous Pan-Armenian Games. A festive parade will be held during the opening and closing ceremonies of the games. The Committee has chosen the Olympic bear as the symbol of the parade. The teams of the cities, which are to compete, were chosen during the drawing procedure at the Committee's session, Thursday. The design of the operating personnel was worked out by Hakob Kirmizyan. Designer Vard Alexanyan prepared special medals and cups for the winners of the Pan-Armenian Games.

The gray toy bear with the Armenian tricolor on its head and neck and fire from Garni brought to the Vazgen Sargsyan Republican Stadium in Yerevan on August 18th 2007 will herald the opening of the Fourth Pan-Armenian Games.

2,100 sportsmen from Armenia and the Diaspora have already claimed participation in the week of games.

The minister explains participants’ activity with the decision made after the third games to hold them every four years, instead of the previously set two.

The third pan-Armenian games were attended by 1,326 participants from 75 countries (See: http://www.armenianow.com/archive/2004/2003/august15/features/patriot/index.htm)

The minister underlines there has never been such a large sporting event in Armenia as the games.

“This means strengthening Armenia-Diaspora ties, cooperation in sports, which makes possible to choose our best sportsmen in Diaspora and include them in the national teams of the Republic of Armenia,” Grigoryan told ArmeniaNow.

The State budget has allotted 80 million drams ($237,000) for the organization of the games and expenses for medals and uniforms and other necessitites are covered by partnering sponsors.

Competions will include 10 kinds of sport – football, futsal, badminton, basketball, volleyball, tennis, table tennis, field and track athletics, swimming and chess. For the frist time this year football games will also be held in the regions – in the towns of Abovyan, Ashtarak, Artashat and Ararat.

The obvious leaders with the number of the gained medals are the sportsmen from Yerevan: 36 golden, 22 silver, and 19 bronze medals.

Gayane Tunian (Yerevan, tennis) was recognized as the beauty of the games.

The prize "Fair game" was handed to the volley-ball team of Los Angeles. The team of Istanbul was recognized as the best sporting delegatation of the Diaspora. The prize "Sporting soul and patience" was given to the men's basket-ball team of Kahire.

Serge Sargsian, the Prime Minister of the Republic of Armenia, was awarded with the "Sign of Honor" order of the world committee of the Pan-Armenian Games.

The closing ceremony of the games took place in the Opera and Ballet National Academic Theatre after A. Spendiarian. A great concert was organized in the Azatutiun (Freedom) square after the official ceremony.

Attack to the Turkish Armenians

The US Diaspora attacked the Turkish Armenians participating in the World Armenians Olympics in Erivan.

The Diaspora games held in Armenia were marked by fights. When Istanbul team was insulted, a fight started, police entered the field and the game stopped for 15 minutes.

Last week the World Armenian Olympics were held in Erivan, the capital of Armenia and Armenians living in different countries participated in the games. This time, the games held every four years were marked by ugly attacks not sports. The male basketball team of US Armenians attacked Istanbul team from Turkey. American basketball players provoked a Turkish player during a double game by saying "ugly Turkish dogs".

The fight started upon these words; police entered the field and the game stopped for 15 minutes. The American team denied the claims and said: "we did not make such an insult. They started the fight by insulting us. They are not real Armenians they are semi-Armenians."

A Turkish daily yesterday carried reports of a clash between Turkish-Armenian and American-Armenian basketball teams at the Pan-Armenian Games in Yerevan, however the captain of the İstanbul-based team later said the report had exaggerated any racial element to the incident.

The Turkish daily Sabah reported on Monday that members of the American-Armenian team Glendale attacked Turkish-Armenian players during the game. Explaining that the event, which brings together Armenians living in different countries took place last week, adding: "This time, the games held every four years were marked by ugly attacks, not sports. The US Armenian male basketball team attacked the İstanbul team from Turkey. American basketball players provoked a Turkish player during a double game by saying ‘ugly Turkish dogs'." The report added that the police had had to intervene in the brawl. "We beat the Yerevan team the day before our match with [US side] Glendale. Team members from Glendale had watched that game and I'm sure they had an idea about how powerful our team was. So they were pretty tense at the game the next day," said Alen Tekbıçak, the captain of the İstanbul basketball team, comprised of Turkish-Armenians. "The players pushed and shoved one another and police had to interfere, plus fouls were given to both sides, but nobody called our team players 'dirty Turkish dogs'," he explained. Tekbıçak said the players from both sides shook hands at the end of the game, which ended with Glendale's 74-65 victory on Aug. 20. The team members also came across each other that night at a dinner and had a friendly chat, he added.

The newspaper report cited an article by an "Armenian journalist," Onnik Krikorian, who gave an account of the events on his blog, www.oneworld.am The Armenia-based British journalist and photographer Onnik Krikorian replied to Today's Zaman by e-mail, saying: "I was there at the game and saw the fight on the court as shown in the photos I took. However, I didn't hear the actual insult that is alleged to have happened, which is why I've said that it's according to one side. However, I did speak to one of the Glendale players after the match who denied that the fight had anything to do with the fact that the İstanbul Armenians were from Turkey. He added 'They're half-Armenian after all' and 'They have some Armenian blood in them'."

Krikorian also noted that the game seemed tense throughout, but "it's important to note that the other matches I saw involving İstanbul teams passed peacefully and without any tensions on or off court." Regarding the fight, a few of the Glendale players have left comments on Krikorian's Web site. Some of them do not deny that derogatory remarks were made toward the İstanbul team, and one even accuses them of "acting like Turks," suggesting their origin did play a role in the fight.

The Pan-Armenian Games are hosted every four years in Armenia with the participation of Armenian athletes from all over the world. At the closing ceremony, Armenian Prime Minister Serzh Sargzyan presented a cup to the Turkish team for representing their city in the best way. The games were held between Aug. 18-26 and Turkish teams participated in football, volleyball, basketball, tennis, chess and track-and-field events.