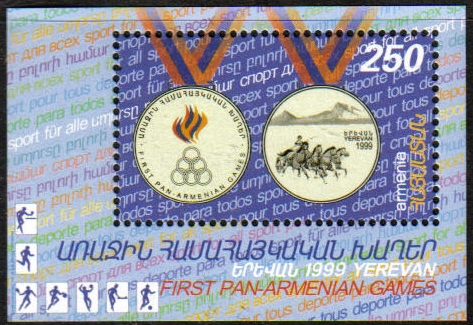 A very beautiful large stamp (called Souvenir Sheet) to commemorate the First Pan-Armenian Games. Issued 28 August 1999, showing the front and back of the medal.

An Executive Committee was created under the Government by then minister of Local Self-Government Khosrov Harutunyan for the practical execution of the First Games, support with cultural program, sport halls and stadiums, medical service, security and judgment.

The interaction of both committees - World and Organizing and energetic activity of the government of the Executive Committee gave the opportunity to make this first sport competitions in the modern history of Armenia reality in a short period of time.

The torch of the Games was lit in Garni temple, legendary Olympic champion Albert Azarian brought it into the stadium during the opening Ceremony of the Games. Alina Markosyan from Aleppo was selected "Miss Pan-Armenian Games 1999"