Difference between revisions of "Edward Mardigian" 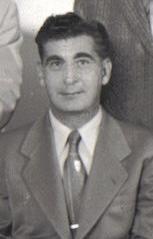 Edward Mardigian was born in Constantinople on October 25, 1907. He was the youngest of Stephen Mardigian's children, and was only six when he immigrated to the United States. Stephan Mardigian, who had been working as a Butcher in Toledo, OH, saved enough money to bring the family to the United States in October 1914, on the eve of the Armenian Genocide.

Stephen Mardigian's first order of business, once settled was to ensure for his children, the best educational opportunities and benefits that America had to offer, and which had been denied to his people in Turkey. Luckily, an excellent student blossomed in Edward, who couldn't seem to surround himself with enough books to satisfy his thirst for knowledge, particularly for the automotive industry and technology.

Losing his mother at the age of 12 was very difficult for young Edward, but was not enough to slow him down, and by the age of 15 he joined his brothers at the Ford Motor Company, enrolling in the Trade School in Highland Park, MI. He entered the industrial field as a tool and dye designing apprentice student. He graduated in 1928 with excellent marks and was offered a great position with Ford Motor Company in Detroit.

In 1930 Mardigian left Ford Motor Company and joined Chrysler Corporation, which allowed him to attend night classes at the Detroit Institute of Technology and Wayne State University, where he soon would earn the equivalent of a high school diploma and the training of a mechanical engineer.

By 1933 he had the knowledge, education and passion to begin an exciting and successful career. In that year, Mardigian accepted the position of Assistant Chief Tool Designer with Briggs Manufacturing Corporation. In 1934 Briggs sent Mardigian to London, England to supervise the first major tooling program at their Dagenham plant, and in 1936 he returned to the United States to head up the process and estimating department, which he would lead through the difficult and early part of the second World War.

Mardigian left Briggs in 1943 and formed a tool and die company called Oakman Engineering Co., and the following year bought a major stake in Northern Engineering Co. These two companies would later enter the production realm and become known as the Mardigian Corporation.

On July 19, 1981 an article in the New York Times announced the engagement of Siran H. Hovnanian, daughter of Mr. and Mrs. Hirair S. Hovnanian to Robert Douglas Mardigian, son of Mr. and Mrs. Edward Mardigian of Birmingham, Michigan. The couple was married in August of that year at St. Vartan's Armenian Cathedral in New York, with the ceremony attended by Archbishop Shahe Ajamian of Jerusalem.

Edward Mardigian was the Uncle of Philanthropist Aram Abgarian.

Along with Alex and Marie Manoogian, Edward and Helen Mardigian were major benefactors of St. John’s Armenian Church in Southfield, MI.

In 1987, Helen and Edward Mardigian donated $500,000 to the Armenian Research Center endowment and $350,000 to an endowment for the campus library. Pleased with the work of the Armenian Research Center and with the generosity of the Mardigians towards the University, which has extended beyond their original contributions, the then Chancellor of the Dearborn campus, William A. Jenkins, recommended to the President of The University of Michigan, at that time Harold Shapiro, that the University name the campus library the Edward and Helen Mardigian Library. This the Regents did the following year. 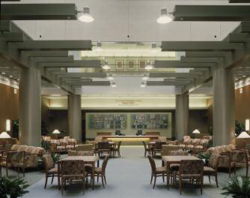 The University of Michigan In 1996, a $3 million gift from the Mardigian Foundation in honor of the late Detroit-area industrialist and philanthropist Edward Mardigian and his wife, Helen, helped in the construction of the U-M Comprehensive Cancer Center and Geriatrics Center Building. In recognition of the family foundation’s generosity, the building’s lobby was named the Edward Mardigian Memorial Lobby. “We have always believed in sharing,” Helen Mardigian said in announcing the gift. “We have always wanted to do something for the Hospital. Edward would be very pleased.”

The Royal Oak Beaumont Hospital Funded by a $1 million donation from the Edward Mardigian Family, the Mardigian Family Surgery Center at the Royal Oak Beaumont Hospital provides a comfortable and bright waiting area for family members, flooded with the warmth of daylight from the skylights above. The area features a children’s playroom and a business center with computer access and health care information. To enhance patient privacy, coaster pagers, similar to those used in restaurants, summon waiting family members to the postsurgery consultation with the surgeon.

Exhibits include historical and religious artifacts, many brought to Jerusalem by pilgrims, including hand-woven rugs, a collection of Armenian coins, huge copper cauldrons crafted by Armenian smiths, colorful tiles from the world-famous Kutayha district, and a map of the ancient world printed in Armenian. There is also a replica of Gutenberg`s original printing press, the first to be established in Jerusalem in 1833.

The Armenian Students' Association of America awarded Mr. Mardigian the Sarafian Award for Good Citizenship in 1986.

Each week, they give their time to share their love of Christ with our youngest parishioners. But most parish Sunday School teachers are not professional educators. So, to help them reach our children, the Diocese of the Armenian Church of America (Eastern) works to provide on-going training, inspiration, and encouragement to local Sunday School staffs across the Diocese.

One successful training program for educators is the Helen and Edward Mardigian Institute, which this year took place from August 17 to 22, 2004, at the Diocesan Center in New York City and at St. Nersess Armenian Seminary.

Organized by the staff of the Diocese's Department of Youth and Education, the Mardigian Institute has trained more than 350 Sunday School educators since its founding 26 years ago. This year's group of 10, like those before them, were strengthened by the week of hands-on demonstrations, lectures, and discussions of Christian faith.

"I'm much more confident now in my ability to teach Sunday School," said participant Christine Bagetakos of the St. Mary Church of Washington, D.C. "It's not only all the helpful teaching tips I received, but also the knowledge that there are teachers in other parishes to whom I can turn when I have questions, and with whom I can share ideas."

The sessions covered everything from classroom management and using the Internet for educating, to the use of theater skills in education and a discussion of the holy vessels found on the altar.

"The Mardigian Institute offers everything a Sunday School teacher needs to educate a new and faithful generation," said Anna Demerjian, a teacher from the St. Gregory the Enlightener Church of White Plains, NY.

Since the 2003-2004 Sunday School year will focus on the idea of Christian stewardship, several Mardigian institute sessions offered ways to incorporate stewardship into Sunday School lessons for all ages.

Fr. Daniel Findikyan, dean of the St. Nersess Armenian Seminary, and a presenter at the 2004 Mardigian Institute, illustrated the ways stewardship is expressed in worship.

The last two days of the institute were spent at St. Nersess Seminary. The retreat was led by long-time Christian educator Valerie Goekjian Zahirsky interwove concepts from a contemporary book, "The Purpose-Driven Life," with the words of Armenian saints and early church fathers.

Mary Kazarian, a teacher from St. Gregory the Illuminator Church in Chicago, IL, called the Mardigian Institute a "wonderful experience," adding that she was "really inspired to make the children's Sunday School experiences memorable." Following her experience there, she returned home to assume the vacant post of Sunday School superintendent.

Indeed, "inspiration" was a common theme of the week, cited both by the Mardigian Institute participants, and by those who gratefully observed their dedication to their service.

"You are doing the most important job of the Armenian Church," Archbishop Yeghishe Gizirian told the participants during a graduation ceremony at St. Vartan Cathedral in New York City. "We are so very grateful to you."

The attendees of the Mardigian Institute also had a luncheon meeting with Archbishop Khajag Barsamian, Primate of the Diocese of the Armenian Church of America (Eastern), who thanked them for their dedication to our Christian education efforts.

The teachers and Primate had a long conversation about the importance of their work, the need to reach all our children, and keeping our culture and faith a part of today's world.

"Each community needs dedicated, volunteer teachers like these to help our next generation of Armenian faithful learn the beauty of their Christian faith," the Primate said of the Mardigian Institute participants.

The week-long Mardigian Institute was funded by an endowment established by Helen and the late Edward Mardigian, whose commitment to Sunday School and youth programming has been a long standing tribute to their love of their church. Their endowment allows teachers from all over the Eastern Diocese to attend the summer session at no cost to the teachers or their parishes. This allows smaller parishes to send representatives to the bi-annual institute.

The Mardigian Institute's programming was organized by Elise Antreassian, coordinator of Christian education at the Diocesan Center, along with Nancy Basmajian, executive secretary of the ACYOA.

Sunday School programs across the Diocese are always in need of dedicated educators. You don't have to have classroom experience -- just a love of Christ that you want to share with young Armenians.

The Diocese has resources, expertise, and tools to help educators make their Sunday School program successful. If you would like more information on the next Mardigian Institute and other enriching programs, e-mail Elise Antreasian at elisea@armeniandiocese.org or call (212) 686-0710 ext. 57.

"The Mardigian Institute is a must for all Sunday School teachers," said Sunday School Superintendent Cheryl Arslanian from the St. Gregory of Narek Church in Cleveland, OH. "The session leaders were top-notch, the clergy were caring, and the friendships unique. Words cannot explain how proud I am to be a Sunday School teacher and a member of the Armenian Church. Our children will be the beneficiaries of this unique experience."

E-mail photos available on request. Photos also viewable in the News and Events section of the Eastern Diocese's website, www.armenianchurch.org.

PHOTO CAPTION (1): Participants in the 2004 Mardigian Institute for local Sunday School educators, work on a hands-on project during the week-long training retreat organized by the Diocese of the Armenian Church of America (Eastern).

PHOTO CAPTION (2): Suzann Froundjian, an instructor at the 2004 Mardigian Institute, leads a workshop on Sunday School craft project during the week-long session held in New York City from August 17 to 22,2004.

PHOTO CAPTION (3): Participants in the Mardigian Institute -- a week-long training camp for local Sunday School educators -- discuss their faith, stewardship, and educational techniques during a session held at the St. Nersess Seminary in New Rochelle, NY.

PHOTO CAPTION (4): Participants in the 2004 Mardigian Institute -- a Sunday School educator training program hosted by the Diocese of the Armenian Church of America (Eastern) from August 17 to 22 -- meet with Archbishop Khajag Barsamian, Primate of the Diocese.