Difference between revisions of "Duduk" 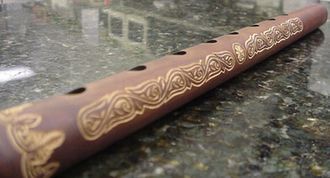 Armenian oboe. A Armenian single or double reed wind instrument made of apricot wood with a sound that has a humanlike voice quality. It has a cylindrical wooden pipe, a broad reed and nine holes (8 finger-holes and one thumb-hole). It has a warm, soft, slightly nasal timbre and full tone. This instrument is equally used for slow lyrical tunes (accompanying folk songs) and faster dance-tunes and it is also played solo. The tuning is basically untempered diatonic, though chromatic notes can be obtained by partially opening or closing the finger holes. The double reed is a slit-tube-like reed. The origin of the duduk goes back to times before Christ.

No other musical instrument is able to convey the emotions of the Armenian people so honestly and eloquently as the duduk, Born in the early eons of Armenian history, it is purely Armenian. Because of its evocative and colorful timbre and warm sound, the duduk has become part of everyday life in Armenia. Today, no festive occasion, wedding reception or family feast is complete without a dudukist.

The duduk is a form of oboe hand-made almost always of apricot wood, with a 1,500-year history behind it. The duduk is strictly Armenian. Traveling Armenians have taken it to Persia, Azerbaijan, Turkey, the Middle East and as far as the Balkans, where derivatives are played. The instrument itself is simply a hollow pipe with eight finger holes on the upper side and one thumb hole on the bottom. It has a warm, soft, slightly nasal timbre, but it is capable of a wide-range of melodies and drone notes sustained for long periods of time. It is invariably played with the accompaniment of a second 'dum duduk,' which gives the music an energy and tonic atmosphere, changing the scale harmoniously with the principal duduk.

The duduk is built in three sizes, ranging from 11 to 16 inches. It requires a specific type of double reed, categorized as a split or slit-tube reed. As a musical instrument, it has not changed through the centuries, but the manner of playing it has been perfected and its sound has been improved. Its range is only one octave; however, it requires considerable skill to play, - its dynamics controlled by constantly adjusting the lips and fingers. The tuning is basically untempered and diatonic, though chromatic notes may be obtained by partially covering the finger holes.

The duduk repertoire consists of folk ballads as well as upbeat dance music. Composers have even written orchestral pieces for the instrument.

Above has been sniped from http://www.garni.com/articals/duduk.html

History The Duduk (pronounced “doo-dook”) is one of the oldest double reed instruments in the world. Indeed, it’s origins can be traced back to at least before the time of Christ. Of all the traditional instruments played in Armenia today, only the duduk is said to have truly Armenian origins. This seems to be supported by the fact that, unlike the duduk, all of these other instruments can trace their lineage’s back to the Arabic world and to the countries of the Silk Road.

Throughout the centuries, the duduk has traveled to many neighboring countries and has undergone a few subtle changes in each of them, such as the specific tuning and the number of holes, etc. Now variants of duduk can be found in Georgia, Azerbaijan, Turkey, and Persia, and even as far away as the Balkans. Besides being called variations of the Armenian word “duduk”, such as “duduki” (in Georgia), it is also referred to as “mey” (in Turkey), and “balaban” (in Azerbaijan and in parts of Central Asia).

The basic form has changed little in it’s long history. Originally, like many early flutes, the instrument was made from bone. Then it advanced to a single, long piece of reed/cane with the mouthpiece fashioned on one end and holes drilled out along it’s length for the notes. However, this had the obvious disadvantages of a lack of durability, namely when any part of it would crack you had to make an entirely new instrument, and perhaps equally frustrating, it could not be tuned. So, to address both of these problems, it was eventually modified into two pieces: a large double reed made of reed/cane; and a body made of wood. This is the form that is still in use today.

While other countries may use the wood from other fruit and/or nut trees when making their instruments (often plum and walnut in Georgia, and Azerbaijan, for example...), in Armenia, the best wood for making duduks has been found to be from the apricot tree. It has come to be preferred over the years for it’s unique ability to resonate a sound that is unique to the Armenian duduk. All of the other variations of the instrument found in other countries have a very reed-like, strongly nasal sound, whereas the Armenian duduk has been specifically developed to produce a warm, soft tone which is closer to a voice than to a reed. It should be noted that in order to further accentuate these qualities, a particular technique of reed making has evolved, as well.

While recent appearance’s of the duduk in various movie and TV soundtracks (“The Last Temptation of Christ”, “The Crow”, “Zena, Warrior Princess”, etc...) has accentuated it’s evocative and soulful side (and understandably so!...), it may surprise some to find that it is also quite capable of a wide range of melodies, including rhythmic dance tunes. It may very well be because of this wide range of expression, combined with the depth and power of it’s sound, that the duduk has truly become a part of everyday life in Armenia. In fact, it would not be an exaggeration to say that no wedding, festive occasion, or family gathering would be complete without a duduk player... more detailed instructions are available at our web site ©® www.Duduk.com

That's the soulful sound of the duduk. The duduk is a kind of folk oboe from Armenia. It's played here by the Armenian master of the duduk, Djivan Gasparyan. In Gasparyan's homeland, the duduk embodies Armenian culture and pervades folk music. But there's no need to leave the United States to hear it. There's probably one playing at a theater near you. The World's Adeline Sire explains.

The duduk has become the stuff of Hollywood soundtracks. It's about 2000 years old, so it's probably the oldest and the hardest working instrument in show business. Many blockbusters have featured it, including The Crow, Dead Man Walking, The Siege, and even Hulk. The trend started with the 1988 film "The last temptation of Christ." That soundtrack was composed by British rock musician Peter Gabriel.

Venezuelan-born musician Pedro Eustache was haunted by the sound of this mysterious instrument.

Pedro: "I said what the heck is that? It sounded like a cello meets a voice, meets a clarinet, meets a lot of pain, incredibly expressive and it just rocked my world."

Eustache took up the duduk in 1994 after he was introduced to it by Armen Anassian, of Los Angeles, who was then Yanni's music director. He then studied with master Djivan Gasparyan. He soon learned the secrets of this rudimentary instrument made of Armenian apricot wood. It's topped with a large reed.

Eustache is a freelancer and in Hollywood, he's very much in demand by film composers. He plays dozens of woodwinds from around the world. But he treasures the duduk. And likes to improvise on it.

Pedro: Duduk is such a difficult instrument, pfffff.....it kicks my butt all the time, excuse my French--which is not French-- but duduk can express something very specific, peculiar, particular, that nothing else can express. I would say evocative, I would say extreme expression from sweetness to pain and they say in Armenia, the sound of this instrument is a prayer."

That quasi-holy sound has made the duduk a welcomed guest in religious film epics. In 2004, 16 years after "the last temptation of Christ " the duduk appeared in Mel Gibson's film "the Passion of the Christ." And this time, Eustache was playing.

More than an instrument, the duduk is a dramatic device. John Debney composed the score for "the Passion of the Christ." He says he chose the duduk because it sounds just like a human voice. But he says that usually when film composers use it, they aim to refer to the distant past and distant lands.

Debney: "It does evoke something ancient. I think that most westerners are drawn to this instrument because it is a plaintive instrument that is very exotic and very beautiful. And I think that's very appealing."

Filed under "ancient times" evoked by the duduk, you find the films "Gladiator" and "Alexander." And as for exotic, in 2005 alone, the duduk evoked a fictitious land in "Chronicles of Narnia," and the middle east in "Syriana" and "Munich."

Pedro Eustache is the featured duduk player in Munich's soundtrack. And he's played many more gigs, even in settings beyond Hollywood. He says the duduk is quite a chameleon.

Eustache also performs with classical Indian music master Ravi Shankar. In 2002, Eustache performed with Shankar and his band in London. It was a memorial concert for the Beatles' George Harrison. Shankar had written a duduk solo for Eustache. And that solo didn't fall on deaf ears. Paul McCartney was so impressed by the sound of the instrument that he inquired about the musician who'd played it.

McCartney: "He said that he called Ravi Shankar....and said "Ravi, I want to have that Indian musician that plays this mournful Indian instrument.... voovoovoo.... and Ravi said "No no no, he's not Indian, he's from Venezuela and the instrument is from Armenia.. hahaha..."

McCartney called Eustache and invited him to play a duet on his latest album "Chaos and creation in the garden." The song is "Jenny Wren." Pedro Eustache is convinced that this folk horn from Armenia has a powerful and limitless reach. He says it will definitely outlive its current fad. It's just a hunch but it's based on experience.

Eustache: "I'm from Venezuela, South America. My parents came from Haiti and I am a whole multicultural weird thing. My point being, there are things that go beyond geography and chronology an the sound of the duduk is one of them. I have played this instrument anywhere and everywhere and it affects people, it immediately capture's people's sensibilities, it connects deeply with them, I think there is something so incredibly universal about the sound, the strength, the reality of this instrument." Its appeal is so universal that last November, UNESCO issued a proclamation naming duduk music a "Masterpiece of the Oral and Intangible Heritage of Humanity."

As for Eustache, he'll next play on a couple of songs Stevie Wonder is writing for a documentary. Eustache says the R'N'B star loves the instrument so much he's getting one for himself. The duduk's next appearance will be brought to the silver screen by composer Hans Zimmer. Zimmer asked master Djivan Gasparyan to the play for the soundtrack of "The Da Vinci Code," out this May.

For information about Pedro Eustache and his latest solo CD, go to: http://www.pedroflute.com http://www.duduk.com