Difference between revisions of "Djivan Gasparyan" 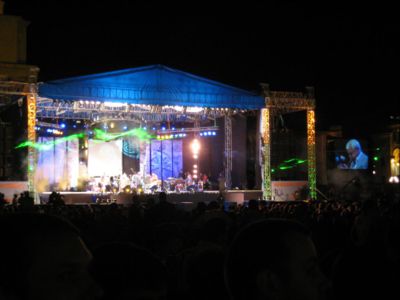 Djivan Gasparyan (Ջիվան Գասպարյան) is an Armenian musician and virtuoso of the duduk, a traditional Armenian woodwind instrument.

He has collaborated with many artists, such as Hossein Alizadeh, Michael Brook, Peter Gabriel, Brian May, Lionel Richie, Armen Chakmakian, Derek Sherinian and Hans Zimmer.

In 2006, the album Endless Vision, on which he collaborated with Iranian composer Hossein Alizadeh, was shortlisted for a Grammy Award in the Best International Album category.

After three decades, Lebanon was invaded by Jivan Gasparian, the 70 year-old world famous Armenian musician for his playing and composition of the duduk, or Armenian traditional flute.

The Armenian cultural and Benevolent Association organized the concerts. Gasparian performed to a primarily Lebanese-Armenian audience at the Emile Lahoud Exhibition Hall located in Dbayeh.

Gasparian’s orchestra played traditional folk songs that were accompanied by a number of fold dances performed by a team from Armenian choreographer, Sophie Devoyan’s “Theater of Dance and Soul” group for the first half of the concert.

Gasparian played an affluent and diverse program which included popular Armenian songs and melodies as well as an excerpt from his work on the soundtrack of the Oscar-winning Ridley Scott film “Gladiator.” His personal composition “Sokhag” (“Nightingale”), in which his duduk narrates a tale of love and nature was the piece he ended the concert with.

Gasparian is famous world wide for his mastery of the duduk and is a regular contributor and performer on the popular world music scene.

Armenians believe that the duduk is able to convey the emotions of the Armenian people so honestly and eloquently. The duduk has become part of an Armenian’s everyday life. Today, no occasion is complete without a dudukist.

The duduk, a wooden flute and form of oboe is hand made from apricot wood. The Armenian name for the instrument is “dziranapogh” (apricot pipe); this is the name Gasparian prefers to call it. The word “duduk” has only been used in reference to the instrument for about a century; it is borrowed from the Russian word “dudka,” which is another folk pipe. This graceful instrument is solely Armenian with about 1,500 years of history behind it.

At age 8, Gasparian discovered the instrument that he now coaxes the sounds and spirits of nature and the human soul.

Gasparian's projects have included recordings and performances with the Yerevan Symphonic Orchestra, the Los Angeles Philharmonic Orchestra, the Kronos Quartet, as well internationally famous musicians and composers such as Peter Gabriel, Michael Brook, Lionel Richie and Andreas Vollenweider. Of the many awards he has won for his music the most recent was in 2002 when he was presented the World Best Musician Award at the World Music Expo in Berlin, from a total of 1900 artists from 80 countries.

"The duduk has a marvelous temper. Whoever listens to its sound, falls under its spell," Gasparian said. He stressed the critical importance of playing the instrument with great skillfulness, adding, "If you use it in the right way, it turns out to be an extremely valuable instrument."

Recently the duduk has received wide attention in Mel Gibson's film "The Passion of Christ," when a former student of Gasparian, Levon Minassian, plays the instrument prominently in the musical score.

For Gasparian it is a part of his legacy. "I have paved duduk's international path and have equaled it to violin. If the young musicians wish to become artists, to continue my story, I will be more than content," he said.