Difference between revisions of "Dilijan"

Sharambeyan Street in Dilijan from below. 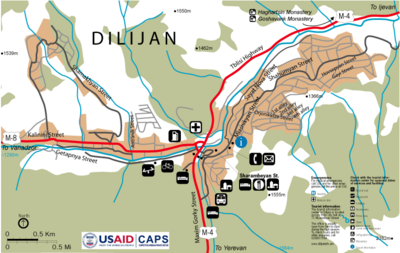 Dilijan (Arm: Դիլիջան) is a city in the Tavush region of Armenia. Called by locals the "Little Switzerland" of Armenia, it is a worthwhile place to see, and spend the night. The forested town has some great examples of traditional architecture of the region and is a brief trip to the beautiful monasteries of Haghartsin and Goshavank. Sharambeyan street near the bus stop has been preserved and maintained as an "old town Dilijan", complete with craftsmens workshops, a gallery and a museum. The cool green forests are a nice contrast to Ararat Valley, especially in the hot summer. Dilijan has a rich historical and cultural heritage. During excavations in the prehistoric cemeteries of Golovino and Papanino near Dilijan, bronze items of almost three thousand years old were found, including armours, daggers, pitchers, ear-rings and others were found. All those items could be found either in Dilijan museum or in the Hermitage Museum. Dilijan has become an increasingly popular tourist sight thanks to the opening of many inns and cafes. Several new educational and financial projects are set to transform the city.

Take a marshrutni from the Pjhishkakan Hamalsaran (Medical University) on the corner of Abovyan and Korion to the upper Avtokayaran. From there you can take a marshrutni headed to Ijevan that will stop in Dilijan on the way.