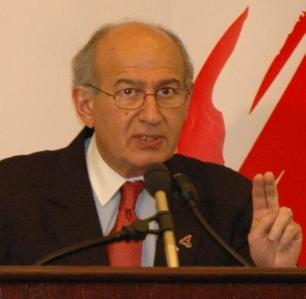 Professor Kouymjian has had a varied professional career. He began teaching 40 years ago in the Humanities Program at the American University of Beirut; from there he went on to Columbia University in New York where he also taught Humanities (1961-64). From 1967 to 1971 he was Assistant Professor of Islamic History and Assistant Director of the Center for Arabic Studies at the American University in Cairo, Egypt. In 1971-72 Dr. Kouymjian was Chairman of the Department of Armenia Studies at Haigazian College, and from 1972 to 1976, Associate Professor of Armenian and Near Eastern History at the American University of Beirut. In 1976, UNESCO sent him on a special mission to train curators in archeological museums in Libyan Arab Republic on the conservation and preservation of their ancient coins. Later that same year he was engaged by the American University in Paris to teach classical, medieval and Islamic history and art. Though at Fresno State since 1977, Dr. Kouymjian has also taught elsewhere. In 1987 he was awarded a Fulbright Senior Lectureship by the United States government to teach in the Department of Foreign Languages and Literature at Yerevan State University in Armenia. He was instrumental in establishing the Exchange Program between Yerevan State and Fresno State. From 1988-1991 he was Director of the Armenian Department and occupied the Chair of Armenian at the Institute for Oriental Languages (INALCO) of the University of Paris. More recently, in 1996-7, he served as the second holder of the William Saroyan Visiting Professorship of Armenian Studies at the University of California, Berkeley. In these institutions he has taught a wide range of subjects: Armenian, Islamic, Classical, and Byzantine history and art, Western and Oriental humanities, film, genocide, and Saroyan studies.

In all these fields, Professor Kouymjian has published regularly with a dozen books and some 100 academic articles to his credit. He has also presented scholarly papers at more than 80 national and international conferences and has himself organized a number of such conferences: David of Sasun, the Armenian Folk Epic (1979), Armenian Architecture (1980), William Saroyan (1981, 1996, 1999), Movses of Khoren, the fifth century Armenian historian (1991), and most recently the massacres of Adana of 1909 (1999). He is a member of ten professional societies, a Fellow of the American Numismatic Society, and four-time president of the Society for Armenian Studies, of which he was one of the founders. He also serves on the editorial boards of five publications in Armenian studies and the Board of Scholars of the Zoryan Institute, NAASR, the Armenian Film Foundation, and for a time the William Saroyan Foundation.

Over the years he has been awarded a number of grants and fellowships from the following agencies and universities: S. J. Johnson Foundation, the Carnegie Endowment, the National Endowment for the Humanities (1981, 1996), the Fulbright Commission, the Alex Manougian Cultural Fund, the Calouste Gulbenkian Foundation, the Carlsberg Foundation, William Saroyan Foundation, the Bertha and John Garabedian Charitable Foundation (multiple), the Rockefeller Foundation, the American Numismatic Society, Columbia University, AUB, AUC, and Fresno State.

Other distinctions include being chosen the sixth recipient of the Hagop Kevorkian Lectureship in Near Eastern Civilization at New York University in 1979; his distinguished lectures were on the topic: "The Iconography of Armenian Pentecost." In 1996 he received encyclicals from both His Holiness Aram I, Catholicos of the Great House of Cilicia, and the late Karekin I, Catholicos of All Armenians, for his work in Armenian Studies. Catholicos Karekin also honored him with the St. Sahag and St. Mesrob medal, the highest honor bestowed by the Armenian Church to scholars and writers. In the same year he was made an Honorary Lifetime member of NAASR. Also in 1996, the two Catholicoses appointed him Chairman of the International Conferences Committee for the 1700th anniversary celebration of Armenian Christianity. In 1997 he served as one of two Americans on the International Advisory Board of the 35th International Orientalist Congress held in Budapest. In the spring of 2001 he was invited ot givve a series of ten seminars to doctoral students at Oriental Institute of the Catholic University of Louvain-la-neuve, Belgium on "Armenian History and Art: The Search for an Identity."

Dickran Kouymjian's most recent publications are on the artistic organization of early illuminated Armenian Gospels, inscribed Armenian manuscripts bindings, the iconography of Armenian versions of the Romance of Alexander the Great, the unique Armeno-Greek papyrus, and the destruction of Armenian property during and after the 1915 Genocide. His Arts of Armenia published in 1992 with 300 hundred color slides is now available on the Armenian Studies Program website, as are part of his Index of Armenian Art. In 1997 he was invited to Armenia by the Ministry of Culture to conduct a two-week festival on the films of Rouben Mamoulian as part of the 100th anniversary of his birth. For the past twelve years he has been writing with Professors Michael Stone and Henning Lehmann a definitive Album of Armenian Paleography (the study of Armenian writing) just published (2002) by Aarhus University Press, Denmark. At the request of Catholicos Aram I he is currently preparing with several other specialists a master catalogue of the objects in the Cilician Museum of the Catholicosate in Antelias. After 12 years of steady research writing the Album of Armenian Paleography a joint effort of Michael Stone, Henning Lehmann and himself has been published by Aarhus University Press, 2002.

Professor Kouymjian shares his time between Paris and Fresno with his wife, Angèle Kapoïan, also a scholar and teacher.