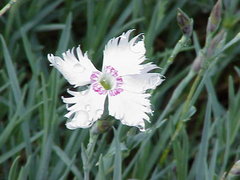 Dianthus is a genus of about 300 species of flowering plants in the family Caryophyllaceae, native mainly to Europe and Asia, with a few species extending south to north Africa, and one species (D. repens) in arctic North America. Common names include carnation (D. caryophyllus), pink (D. plumarius and related species) and sweet william (D. barbatus). The name Dianthus is from the Greek words dios ("god") and anthos ("flower"), and was cited by the Greek botanist Theophrastus.

The species are mostly perennial herbs, a few are annual or biennial, and some are low subshrubs with woody basal stems. The leaves are opposite, simple, mostly linear and often strongly glaucous grey-green to blue-green. The flowers have five petals, typically with a frilled margin, and are (in almost all species) pale to dark pink. One species (D. knappii) has yellow flowers with a purple centre.

Very rare species. Only one population known in Armenia. First collected by Takhtajyan in 1951. Has not been recollected since then.

Has huge scientific and theoretical interest.

The status of the plant should be discovered.