Difference between revisions of "Dadivank Monastery" 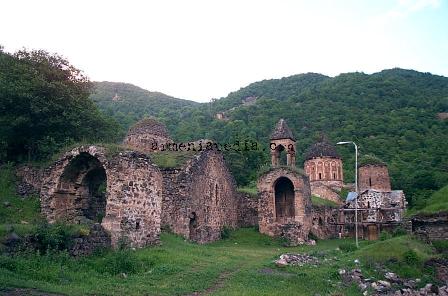 This sprawling monastery is one of Artsakh's greatest gems, with many buildings, rooms, passages and two levels. Some of the buildings are in at least partial ruin, but a large renovation project changed much of that. 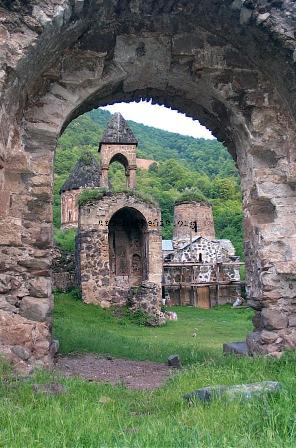 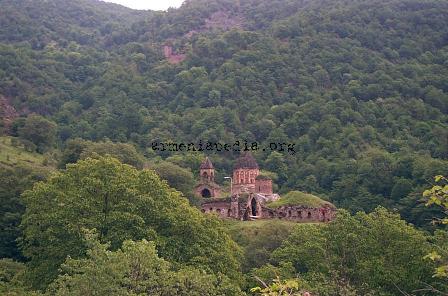 Located in the small hamlet of Vank, more popularly called Dadivank (90p. Դադիվանք) after the impressive 9-13c Dadivank Monastery ★95 ⟪40.161562, 46.288124⟫ is a large monastic complex which is undergoing slow but steady reconstruction and renovation work. Two apostles made their way to Armenia after the death of Jesus, one of them was St. Thaddeus. Dadivank is said to have been founded by and named after his disciple St. Dadi, whose tomb was discovered in 2007 under the altar of the main church. Dadivank has also been called Khutavank (Խութավանք) after the once large nearby settlement of Khot (Խոթ), or alternatively because it is built on a hill (khut - խութ), but there is an actual Khutavank in Martakert Region nearby. The original temple at Dadivank is long destroyed, and the current expansive monastery was built over a long period from the 9-13c, with different building styles forming a beautiful and harmonious brick-red hued whole. There are small sections of frescoes remaining that give an idea of what once covered the walls.

During the 12c, Mkhitar Gosh lived here while working on his Book of Judgment (Datastanagirg; Դատաստանագիրք), a collection of medieval Armenia's feudal law. These laws were used in the 13c Armenian Kingdom of Cilicia, in 16c Poland for the Armenian communities there, and in the 18c incorporated into Georgian law.

The 13c was a time of prosperity for the monastery. Prince Vakhtang's wife Arzu-Khatun built the main St. Katoghike Astvatsatsin Church in 1214. The gavit of church served as a burial vault for the Principality of Upper Khachen's nobility. Both sides of the window on the S wall of the church have reliefs of the prince's sons Hasan and Grigor, holding a model of the church. But the good times ended and Dadivank was looted by Persians, then Arabs, Seljuks, later by Osman Turks and again by Persians. Over the years much of the monastic wealth was lost, but the final blow was the emigration of Armenians from nearby villages. As an example, 300 families from the aforementioned Khot moved towards the end of the 18c to the province of Yerevan and founded Yengija village (Ենգիջա), with a part of this group later uprooting again and moving to the area of Shulaveri (Շուլավերի), a few kilometers into Georgia. For that reason, by the middle of 19c archbishop Sargis Jalalyans found the monastery lonely and ramshackle. "Those are hiding-places for bandits and robbers of Artsakh district" and they in the traditional sacred placed keep "their animals", and "The large gardens are all destroyed, only the wild fruit-trees grow and multiply".

The church structures are all along the N row of structures, along with gavits, belltowers, an arched passage, and a small covered structure which is open on one side housing two large and impossibly intricate "lace" khachkars. These masterpieces were carved in 1283 by master Atanas (Աթանաս). It is thought that some of the lacework design was literally copied from the lacework of Arzu-Khatun herself. Though they no longer exist, we know from old manuscripts that the altar curtains for Dadivank, Makaravank, Haghpat and Goshavank were made by princess Arzu-Khatun and her two daughters. In fact, Kirakos Gandzaketsi says that Arzu-Khatan even painted the interesting frescos on the S wall of the main church herself.

Within the complex is a wide and clear passage, known in literature as poghota (boulevard).

The S row of structures, many on a lower level or 2 floors, has buildings which served many useful purposes, including monastic cells, guest house, workroom, bookroom, etc. Most of them were built during the years of Zakaryan's rule. In the southwestern part are rooms used by the Hasan-Jalal nobility, on the first floor is a winepress and a cellar.

Excavations of a mausoleum at Dadivank revealed a very unusual burial for Armenian Christianity. The burial of a man seated in a chair. It is now on display at the Stepanakert history museum.