Difference between revisions of "Cologne"

The municipal authorities of Colonge, Germany, have paved the way for a memorial dedicated to the “victims of the genocide of Armenians in the Ottoman Empire in the years 1915/16,” Express.de reports.

The Armenian Christian community in Cologne, with its more than 5,000 members, is now allowed to erect a “cross-stone”, an artfully carved memorial stone. It is to be erected on the Armenian burial ground of the cemetery Lehmbacher Weg in Cologne-Brück.

The decision was adopted by the main committee by an overwhelming majority of the votes on Monday.

Social Democratic Party of Germany also considers the Armenian community’s plea for a proper place of mourning and commemoration of the genocide, which will be “completely legitimate and appropriate.”

The now approved genocide memorial in Cologne is likely to further aggravate the German-Turkish relationship. 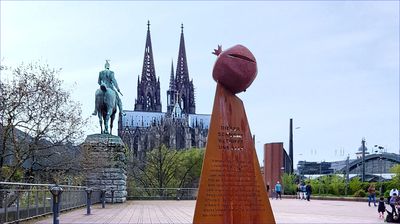 Cologne, Germany (AINA) -- A memorial dedicated to the 1915 genocide of the Armenians stands in a prominent place in the city of Cologne. According to Armenian portal Haypress, it is nationwide the first memorial in a public space to acknowledge the genocide, which was carried out with German participation.

On June 2, 2016 the German Bundestag passed a resolution recognizing the 1915 massacre of Armenians by the Ottoman government as a genocide (AINA 2016-06-06). The resolution also explicitly acknowledged that Assyrians and Pontic Greek were affected by the deportations and massacres as well.

On Sunday, the initiative Remembering Genocide unveiled a sculpture created by the Cologne artists Stefan Kaiser and Max Scholz on the left bank of the Hohenzollern Bridge in the city center. The Armenian community in Cologne is by its own account with 5,000 members, the largest in Germany.

The steel sculpture is about 1.80 meters high. The three-sided pyramid bears on the capped tip a bronze pomegranate with a notch, which symbolizes the Armenian genocide. The inscription entitled This Pain Affects Us All is written in Armenian, German, Turkish and English.

According to a decision by the City Council on April 16, the memorial must be removed "promptly." The reason given is that the action had not been announced to the city and had not been approved.

The city of Cologne pointed out that there is already a memorial stone for the victims of the genocide of the Armenians in Cologne. It is a cross-stone inaugurated in November 2017 at the cemetery Lehmbacher Weg in Köln-Bruck. The Armenian community however, does not regard the cemetery as an appropriate place for a memorial, as remembering must be done in a public space.

With a population over a Million, Cologne is also home for more than 60,000 Turkish migrants. The Armenian community suspects the city succumbed to pressure by Turkish organizations.