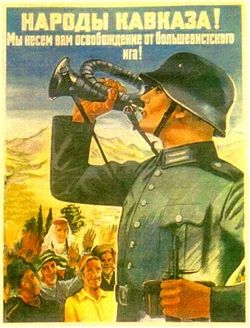 The Caucasus or Caucasia is a region in the far Eastern Europe between the Black Sea and the Caspian Sea, which includes the Caucasus mountains and surrounding lowlands.

The independent nations that comprise today's Caucasus include Georgia, Armenia, and Azerbaijan. Large, non-independent autonomous areas of the Caucasus include Ossetia, Chechnya, Ingushetia and Dagestan, among others. Three areas here claim independence, but are not acknowledged by the international institutions: Abkhazia, Nagorno-Karabakh and South Ossetia. The Caucasus is one of the most linguistically and culturally diverse places on Earth.

The southern section of the Caucasus is known as the Transcaucasus.

Biblical Mountain Ararat where Noah's Arc landed is in Caucasus, in historically Armenian lands. Therefore, Armenians claim that re-birth of the world started from Armenia. The capital of Armenia Yerevan translates in Aramean and Armenian languages as "I see" as in "I see land". In Greek mythology, the Caucasus, or Kaukasos was one of the pillars supporting the world. Prometheus was chained there by Zeus. The Roman poet Ovid placed Caucasus in Scythia and depicted it as a cold and stony mountain which was the abode of personified hunger. In a similarly cultural vein, Loreena McKennitt's song "Night Ride Across the Caucasus" vaguely describes this region. Cheese is a major product of this region.