Difference between revisions of "Batumi" 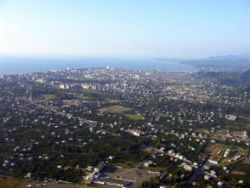 Batumi (Georgian: ბათუმი; Armenian: Բաթումի; also known as Batum) is the capital city of the Georgian autonomous region of Adjara. Since the Rose Revolution and the presidency of Mikheil Saakashvili, the city has become a prime tourist destination for vacationers from Armenia. In 2006, Batumi was twinned with the northern Armenian city of Vanadzor.