Difference between revisions of "Bako Sahakian" 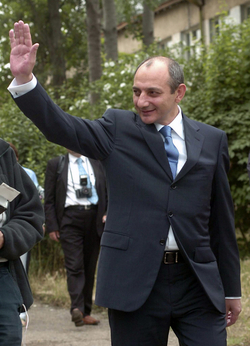 The rest of the nominees received much less votes.

Thus, the NKR people have elected their third President - Bako Sahakian in the first round of voting.

Foreign observers and journalists accredited at the elections have ascertained both high activeness of the voters and transparency of the NKR presidential elections.

Bako Sahakian was born on August 30, 1960, in the city of Stepanakert.

1983-1987 - Worked as a foreman-restorer at the Stepanakert branch of the scientific department on the restoration of ancient monuments.

1987-1990 - Worked at the regional administration on supply as a supplier.

Since 1988 Bako Sahakian has become known as an activist of Artsakh Movement.

Bako Sahakian is a member of RF Academy on Security, Defense and Legality.

He graduated from the Department of Law at Artsakh State University.

Bako Sahakian is married; he has two children.