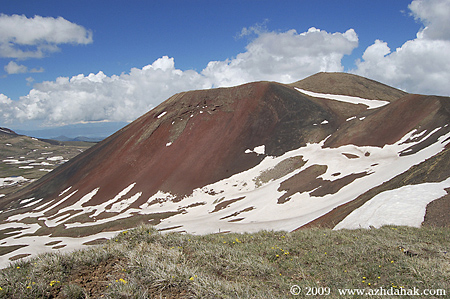 There is lake in the crater of volcano Azhdahak that is formed from melting snow. From the top of the mountain opens pictorial landscape of mountains Ararat, Hadis, Ara, Aragats, lake Sevan, whole Geghama Range and Kotayk valley.

In the surroundings of Azhdahak there is a lake Akna (Armenian: Ակնալիճ) of volcanic origin, "Akna" means "eye" in Armenian.

The South-Eastern slopes of Geghama mountains go across the legendary Khosrov forest preserve.

The compound slag cone Azhdahak figures as a large strewn structure up to 1600m in dia and ca 370m high. The total area of volcano lavas, partly eroded and overlaped by the streams of Tar is around 8 square km. The cone is formed with slags, lapilly, sands, ashes, debrises, lava boulders, slag, twisting, composit and spindle-shaped bombs.

Bird fauna of Geghama Mountain Range includes about 250 species, what makes 70% of all Armenia’s avifauna. Stony slopes are an irreplaceable inhabitancy for birds of prey, such as:

A great number of petroglyphs - rock-carvings has been found in the surroundings of volcano Azhdahak. Most images depict men in scenes of hunting and fighting, as well as astronomical bodies and phenomena: the Sun, the Moon, constellations, the stellar sky, lightning, etc.

Azhdahak in Armenian mythology means men-vishap (men-dragon). Vishaps, live in high mountains, in big lakes, in the sky and in the clouds. Ascending on the sky or going down, especially on lakes, they make roar and sweep away everything on their way. A thousand year old vishap can absorb the whole world.

In Geghama Mountains in cattle breeding are engaged Yаzidi - one of national minorities of Armenia, who move to the mountains for the summer and live in tents with families and even with infants. The Yazidis - an ethno-confessional group, whose main identity is religion – Yazidism or Sharfadin. Nomadic stockbreeding is their major occupation. The Yazidi society is a caste system including three main components: the Shaykhs, the Pirs (clergy) and murids (laymen).

The beauty of the Azhdahak surroundings have long attracted tourists from the whole world.However, the probability of running across each other different hiking groups is insignificant... It depends on the remoteness from the civilization, orientation complexities, that aggravate with weather condition factors, such as: thunder and lightning, hail and snow, fog with visibility down to 2-3m.