Difference between revisions of "Azerbaijan" 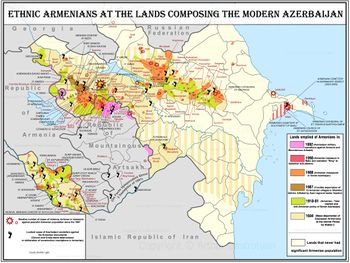 Cleansing of Armenians from Azerbaijan

The Republic of Azerbaijan (Azerbaijani: Azərbaycan, Armenian: Ադրբեջան) is a country bounded by Armenia to the west, Iran to the south, Russia and Georgia to the north, and Turkey by way of the country's Nakhichevan exclave. Today there are thought to be perhaps 15,000 Armenians remaining in Azerbaijan's capital of Baku after most fled in the early 1990s following anti-Armenian pogroms. Those remaining are almost exlusively cases of mixed marriages, usually where the wife is Armenian and the husband Azeri.

Both Armenia and Azerbaijan were republics in the Soviet Union.

In antiquity, significant portions of present-day Azerbaijan were ruled by a Christian state known as Caucasian Albania (not be confused with the modern-day Republic of Albania in southeastern Europe). The country was a confederation of various tribal peoples of Caucasian descent (closely associated with the Georgians and the peoples of the modern Russian North Caucasus). Like Armenia and Georgia, it was Christianized in the 4th century. Their church followed the same branch of Christianity as the Armenian Church, and they used the same alphabet. However, the kingdom was overrun by the Arabs in the 7th century and virtually disappeared. Its indigenous population either died out or was assimilated by its invaders, adopting Islam and later Turkic and Persian influences. In the mountains, pockets of Christians remained. Some have concluded that the modern Udis are descendants of Albanians who resisted assimilation.

After the Russo-Persian War of 1804-1813, the area became part of the Russian Empire in the Treaty of Gulistan. Most of present-day Azerbaijan roughly corresponds to the Imperial Russian Baku and Elisabethpol Governorates (parts of the latter eventually became what are today the provinces of Syunik and Tavush in Armenia and Nagorno-Karabakh). In 1873, oil was discovered in and around the city of Baku, Azerbaijan's future capital. Oil has since become an important source of revenue for the area.

The Musavat (Equality) Party founded and controlled the ADR for most of its short existence. Seeing Ottoman Turkey and the Young Turks as potential allies they named their country "Azerbaijan." This move promoted the concept of Pan-Turkism for if the Ottoman Empire wished they could unify the area with region in northern Iran and then merge the combined territory with the Ottoman Empire. This ideology led to constant clashes between the ADR and the Democratic Republic of Armenia (DRA) which felt itself threatened by the concept. Both countries engaged in territorial disputes over Karabakh, Nakhichevan, Zangezur (Syunik), and Kazakh-Shamshadin (today the province of Tavush in Armenia and the rayon of Qazakh in Azerbaijan), which eventually led to mutual ethnic cleansings on both sides. Eventually, both were subdued by the Bolsheviks. During Sovietization, Kazakh-Shamshadin was divided between Armenia and Azerbaijan. Zangezur came under full Soviet Armenian administration while Nakhichevan became part an exclave and autonomous republic of Soviet Azerbaijan (largely due to terms in the Treaty of Kars). The predominately Armenian region of Nagorno-Karabakh was also assigned to Azerbaijan as an "autonomous oblast" by decision of Soviet dictator (then acting commissar of Soviet nationalities) Joseph Stalin.

After the Soviet takeover of the area, the name "Azerbaijan" was retained because the Soviets too hoped to expand into the region of Northern Iran (something that became apparent during the joint Anglo-Soviet invasion of Iran). Furthermore, the Soviet government also began teaching the idea of a "patitioned Azerbaijan" in Azerbaijani school textbooks, making the divide between the Azerbaijan SSR and the Azerbaijan region in Northern Iran sound similiar to the conflicts over East and West Germany or North and South Korea, even though this was not the case. Despite this, many Azerbaijanis during the Soviet years still lacked a sense of a national identity and if asked in a city like Moscow where they had come from, they would respond by indicating a city or region in Azerbaijan (e.g. "Baku," "Kirovabad", "Sumgait", or "Lenkoran") instead of the republic as a whole.

In general, the Azerbaijanis and the Armenians had friendly relations during the Soviet years (with some cases of intermarriages). However this changed with the renewal of the Nagorno-Karabakh conflict. Local Armenians complained that the government was making efforts to assimilate and "Azerify" the predominately Armenian region. When Soviet leader Mikhail Gorbachev came to power and introduced the policies of Glasnost ("openness") and Perestroika ("restructuring"), the Karabakh Armenians began a peaceful and democratic movement to unite the region with Armenia. Borders changes occured at least a dozen times in the Soviet Union, most notably in 1964 when part of the Manastyrshchyna raion of the Russian SFSR's Smolensk oblast was transferred to the Byelorussian SSR on request of the local Belarusian populace. Demonstrations were held in Yerevan showing Armenian support for their ethnic Karabakh kin. However, most Azerbaijanis supported retaining Karabakh, believing that it could threaten the remaining territory of Azerbaijan and thus the focal point of their republic's national identity. Counter-demonstrations were planned but spun out of control and instead turned into anti-Armenian violence in the city of Sumgait. Thus, the Karabakh conflict erupted.

During the conflict, Azerbaijan went through a succession of presidents: the pro-Soviet/Russian Ayaz Mütallibov, Isa Gambar who filled in as president immediately after Mütallibov, the pan-Turkist Abülfaz Elçibay (whose Minister of the Interior İsgandar Hamidov resigned in April 1993 after having threatened Armenia with a nuclear strike), and finally the former KGB officer and Soviet Azerbaijan leader Heydar Aliyev. Although the latter manged to stabilize the country in the aftermath of the Nagorno-Karabakh War and exploit Baku's oil wealth, he also ruled Azerbaijan as an authoritarian dictatorship and promoted a personality cult around himself. Aliyev's presidency also left the country with a legacy of gross corruption. Upon his death, he selected his son Ilham Aliyev to run as president in his place.

Ilham Aliyev won Azerbaijan's 2003 presidential election amid massive protests by pro-democratic Azeri opposition forces and the Azerbaijani intelligentsia. The election of Aliyev was criticized by many foreign observers and human rights institutions as being neither free nor fair. Under Aliyev's regime, Azerbaijan's human rights record has hit an all-time low while the country's military spending has seen a dramatic increase. He has also managed to crush opposition while retaining a certain degree of popularity by keeping the question of Karabakh's status open.

The Aliyev administration regularly asserts Azerbaijan's territorial integrity over Karabakh. On occasion, it states that peace talks with Armenia are "hopeless" and consistently refuses to have open dialogue with the government of the Nagorno-Karabakh Republic itself. Despite its offer to award the area the "highest level of autonomy," the government also promotes anti-Armenian sentiment in Azerbaijan. Aliyev himself regularly expresses belligerent statements regarding the solution of the Karabakh issue. He has openly threatened to "liberate" the region "by force" and to "attack Armenia in all directions." On January 4, 2008, Radio Free Europe reported a quote from Aliyev that the Karabakh Armenians should accept Azerbaijani rule or be forced to emigrate. [1]