Difference between revisions of "Ashtarak Town" 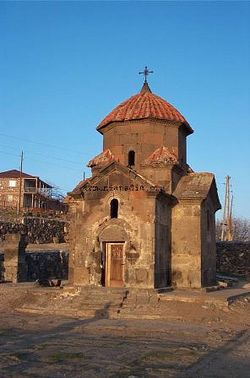 Ashtarak (18,915 p, "Tower") is the administrative capital of Aragatsotn, spread out in and above the gorge of the Kasagh river. The city is endowed with old churches, interesting museums, and some ambitious restaurant/hotel/casino complexes suitable for lengthy carouses. From the highway, a left exit before the massive bridge winds down into Ashtarak, crossing via the lower bridge downstream. Turning right and continuing about 1 km, turn right again just after the main square to reach the Tsiranavor (5 cc. three nave hall, partially restored in 1963-64. In order to defend the church, a second wall surrounding the church was built in XVII c from northern and western sides, and above the southern wall a gun-slot was erected. ), Spitakavor (13 cc. walls remain), and Karmravor* =60= (40 17.98n x 044 21.93e) S. Astvatsatsin (7 cc. The church is unchanged with original tiled roof.) churches, the House Museum of the novelist Perch Proshian, and a view of the old triple arched bridge of 1664. Not far from the bridge lay the ruins of another, probably more ancient bridge (12-13 cc.). S. Mariane church =20= of 1281 is further W. It is marred by an unfinished early 20th c. basilica tacked on. On the right bank of the gorge above the medieval bridge is the new church of S. Sargis on early foundations. Just outside of town, on the opposite side of the highway/bridge is one of Armenia's premier restaurant/entertainment complexes, "Ashtaraki Dzor". This is a site worth visiting even from Yerevan to go to dinner, with it's small zoo, massive gold stage, live singing and often dancing, outdoor setting in a canyon, women making lavash bread in a tonir, and it even offers a paddleboat for couples to get away for a few moments. Prices are not much different than any other bbq joint across the country.

Ashtarak is a city of republic subordination (from 1970), stretched out on the banks of river Kasakh 20-km northwest from Yerevan. It plays a great role as in national economy so in the cultural economical life of republic. There are industrial group of enterprises, vine processing departments, textile factory, institutes of physics investigations, radio-physics and electronic AN ARM, number of cultural-instructive establishments, including the museum classic house of Armenian literature of Persh Proshyan. Many remarkable men of science, literature, social-political life were born in Ashtarak: N. Ashtaraketsi, S. Shahaziz, Perch Proshyan, G. Karapetyan, N. Sasakyan, Gevorg Emin, V. Petrossyan, and others.

About Ashtarak’s rich historical past eloquently evidence the great number of historical- architectural monuments in its territory.

The most ancient one of them is the church Tsiranavor (V c) situated at the very edge of Kasakh’s ravine. It’s a three-nave hall with dimensions of 19,15 x 9,40 m. the walls, the eastern wing, the half-cylindrical floor of southern nave preserved (the church was partially restored in 1963-1964). In order to be more inaccessible the second wall surrounded the church in XVII c from northern and western sides, and above the southern wall a gun-slot was erected.

In both sides of horse-shoe-shaped apses square in scheme side-chapels are situated. The naves had half-cylindrical vaulted floors, taken under separate roofs (with tall middle part). Two entries from south and west lead to the church (the western one is closed at present). There are two windows divided by a pillar in the west wall. The remainders of two joining to the northern wall pilasters of rectangle section (which are a little off from the transversal axis of pylons of T-shaped form) evidence about the reconstruction of the church- the original wooden floor was replaced by a vaulted one.

The Karmravor church (Astvatsatsin, VII c) is situated in the northeastern eminence of the town. It appears to be a cross-domed erection of not very big dimensions, the eastern wing of which closes with a horse-shoe-shaped apse and the others have rectangle form.

This is the best example of this type with pleasant proportions, harmonic volume-spatial and color combination, thanks to which the church makes impression of perfect sculpture work. The church got to us unchanged (with original tiled roof). The drum of the dome is octahedral; the passage from the rectangle foundation to half-rounded arch opens through the mediation of two tromps. The walls were plastered later on, at some places signs of wall paintings preserved. In the decorations of the facades especially stand out the cornices of oblique section of volume wings dotted with the thinnest branding of ornament.

The walls are girdled with undated building inscription. The church is built of huge clearly trimmed stones of reddish-brownish tuff. In the territory of the church, surrounded by a wall, some khachkars of XII-XIII cc preserved.

The church Marine (1281) is situated in the central part of the town, northwestern from the church Karmravor. It’s a domed erection, cross-like in the scheme inside and rectangle from outside (11,45x8, 88m). From two sides two-tiered side-chapels join the apse, from the western wing two square in scheme rooms open. The church’s proportions peculiar to the given epoch are tendency and rushed upward, the facades have the same simple decorations.

The drum of the dome is round from inside and ten-hedral from outside. The belfry over the southern wing was built in 1838. There are two entries from western and southern sides. To the western wall of the church join unfinished erections of the beginning of XX c. the remainders of the serf (fortress) wall built of unprocessed blocks of basalt preserved. The yard was equipped with modern amenities in 1977.

The church Spitakavor (XIII c) is situated not too far from the Tsiranavor church, at the very edge of the rock hanging over Kasakh’s ravine. It is a one -nave vaulted is scheme hall, close to square (4,61x4, 85) from which only the walls preserved. There are two entries from west and south. The only window in the apse lightened the church.

In the eastern part of the town, in the ravine of river Kasakh, a three-bay bridge is situated built in 1664 over which crossed the old road from Yerevan to Ashtarak. The forms and the dimensions of the bays of the bridge are stipulated and different because of the considerable overfall of the heights of two banks. The left and the middle bays have lancet shape and the right one-semicircular form accordingly: 14,5,9 and 7,5 m high. The carriage -way part of the bridge is put on a flat vault, which leans on inside protuberances of the walls. The parapet of the bridge, according to the incline of the carriageway, is stepped. In the walls there are openings for ventilation, made in the direction of the bearings.

The bridge is blend with the picturesque ravine of Kasakh. Not far from the bridge the lay ruins of another, probably more ancient bridge (XII-XIII cc).

Many national dwelling houses peculiar to the early belt of remarkable compositions, with high mastery decorations of on entrance portals, vaulted corridors and balconies also preserved in Ashtarak.

The best examples of Armenian sculpture art appear to be the khachkars of open-worked carving on the middle-aged cemetery in the northeastern outskirts of the town.