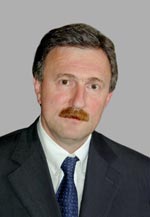 Ashot Baghdasaryan was born on October 8, 1952 in Yerevan.

Mr. Baghdasaryan graduated from the Yerevan Polytechnic Institute in 1974 spe­cializing in food producing equipment. He was awarded a Yerevan Arms Medal in 2002.

From 1974-1975 he worked as an engineer in the Yerevan Planning Institute Electroproject. From 1975-1976 he was an engineer-mechanic in the Production and Geological Trust under the Armenia SSR Department of Non-ferrous Metals. In 1976 he worked as a chief mechanic in the geophysical expedition office. He spent the next five years first as a senior engineer and later leading engineer in the General Mechanics, Energy and Equipment Department under the Armenina Ministry of Food Industry. From 1981-1982 he worked as a chief engineer in Abovyan Beer Factory. In 1987 he was appointed its director. In 1996 he was appointed executive director of the Yerevan Beer CJSC. From 1997-2003 he worked as general director and in 2003 as president of the Yerevan Beer board of directors.

Mr. Baghdasaryan is married and has two children.