Difference between revisions of "Ashot Avagyan" 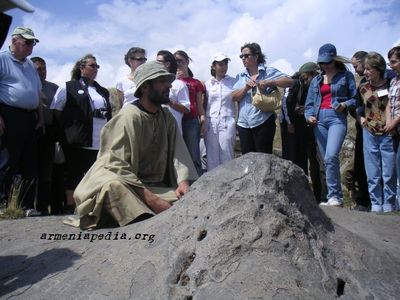 Ashot Avagyan was arrested in late 2020 after a taped phone conversation he was allegedly part of was released. In the conversation the participants are discussing the possibility of assassinating Armenia's Prime Minister Nikol Pashinyan.

Born in Sisian in 1958. In 1981, he graduated from P. Terlemezian Art School in Yerevan, and started teaching. He has works of art in numerous private collections. The last decade has been complicated and contradicting for him, He has taken active part in the process of both making the Armenian Republic independent and the decline of the Soviet Union. He also fought in the Karabakh war, and now is engaged in pedagogy. He gave up painting from 1988 until 1997. Then in 1997 he returned to art again. He considers the begining of his life to be 1998.

Every year since 1997, he has organized exhibitions of his works in the spaces of "Dik-Dik Karer" (Stonehenge) and of petroglyphs of Ughtasar. He believes that his works are experiments of psychological and ideological revelations of cultural rock paintings and the megalitian period.

Avagian believes that he has inherited his genetic memory from the Jungian cultural archetype, and he is a middleman between athno-abstractionism and painting.

Today Avagian lives in a new stage of creation, trying to fill the canvas space with the absence of any criteria and with the repetition of time.

He is the author of two video films entitled Bravers' Spirit (1997) and Ideal Fix (1998). Ideal Fix has been exhibited in two international film festivals. His latest film, Return and Taking Place, are in the final stages of work. He has also done work in the field of literature.

Art and Nature: A painter engages with the myths and meanings of his world

Terracotta with sawn off feet,

Green with the song poisoned with botulism,

Ellipse with the pale of doom on its face…”

In this way and with this imagination does the Sisian artist Ashot Avagyan explain how he visualizes his art. He conveys the content of his canvases in words.

Everybody in Sisian knows the 47-year-old artist, not only for his talent but also because he seems to be the only one who is not going to leave his town. He says he loves the land and the people, and so feels responsible for his love.

For many years Ashot has taught painting in Sisian’s school of fine arts. The achievements of his students are the main reason for his smile.

“I have been painting since childhood: I am quite lazy in terms of physical work, and to avoid working in the garden I decided to go to art school. That is how I began my life as a painter,” he says.

There Ashot studied the mythic places surrounding his town – the Zorats stones with the famous ancient observatory of Karahunj, Ukhtasar with petroglyphs representing thousands of years of history, Portakar, a conic stone symbolizing fertility. Then he moved on to the legends associated with them.

He started to reproduce the petroglyphs in paint, mixing the stones and the stories into mythical subject matter for his work. “Madonna Neolithica”, “Totem”, “Memories of Past Life” – those are the names of several of Ashot’s paintings.

The Zorats stones become significant to Ashot, especially in the years of the Artsakh war. They served as a place of pilgrimage for units of freedom fighters from Sisian, Ashot among them. They prayed there before going to the front, and visited again on their return to give thanks.

Scientists believe the Zorats stones date back 7,500 years to the late Neolithic era. Says Ashot: “I remember when I saw the Zorats stones for the first time I was filled with some kind of fear: I felt there is something incomprehensible in them that propels you into another dimension. That’s when I decided we should organize festivities there.

“When we try to understand the unclear, even though we become part of this phenomenon, it remains independent of us…,” writes Ashot.

Thus becoming a part of unclear phenomena the painter creates another type of art – one that for many is difficult to understand. By means of subjects, symbols and performance he begins to reveal nature.

August 11 is the day of Navasard, or New Year, according to the ancient pagan Armenian calendar. Every year since 1999, Ashot with his friends and other interested people have marked the occasion by performing his art – what he calls video art-actions – in the Ukhtasar, the Zorats Stones and the Portakar.

The first action at the Zorats Stones relates to two elements of nature, stone and wind. He demonstrates their relationship by hanging paintings on rope around the stones and allowing the wind to blow them. Stone is an analogy for soil and wind for ether: the paintings demonstrate the relationship between their static and dynamic properties.

The next action is organized at the Ukhtasar petroglyphs. At the nearby lake, they glorify the water as a symbol of decomposition, immateriality and rebirth.

“Through painting, we created a road between the petroglyphs and the water. We performed the past connection to the source of rebirth – water. Why does Astghik the Goddess enter the water every night? The answer is simple: to be reborn,” explains Ashot.

The final action is devoted to fertility. This one takes place in Portakar, which has for centuries drawn women suffering from fertility problems to lie on its stones in the belief that it will help them to become mothers.

Ashot paints on the body of a half-naked woman symbolizing fertility, and then covers her with a white sheet that represents the loss of virginity.

The most interesting action is devoted to the origin of the universe. Ashot has called it “Forgive Me Mama”. An important element is the symbol of the sun: participants dye stones yellow and place them around the water in the form of the sun. Ashot throws one of the stones into the water as a sacrifice to the sun, then women throw apples into the water, a reference to Eve in the Bible, and symbolizing their rejection of the temptation of men.

“We try to depict a return to the honest human sources to show that correcting mistakes is possible. But a strange and interesting thing happened during this action. When the women threw apples into the water, a boy ran into the lake, took one of the apples and began to eat it. Maybe that was also symbolic: despite everything man becomes the victim of woman’s seduction,” says Ashot

Those are the words Ashot uses to try to make his art comprehensible to the world.