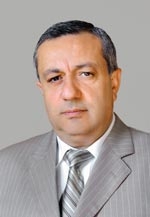 Mr. Ghaloumyan graduated with a degree in economics from the Yerevan Institute of National Economy in 1987.

From 1975-1977 he was a worker in the Ijevan Rug Factory. From 1977-1979 he served in the Soviet Army. For the next thirteen years he worked first as a worker, then chief salesperson, head of food store in a regional cooperative firm in Ijevan, later as a deputy head and then head of its cafeteria. From 1992-1996 he was the representative of Voronezh (Russia) ARMI and TNP and Vestros firms in Armenia. From 1996-1997 he was the deputy director of the Ijevan Association. From 1997-1998 he was the head of the Environmental Protection Department of Tavoush Regional Administration. For the next five years he was the director of Ijevan Roads Construction and Use CJSC under the RA Ministry of Transport and Communications.

On May 25, 2003 he was elected to the NA from electoral district # 55 and he is currently on the NA Standing Committee on State and Legal Affairs and is a member of the “People's Deputy” Deputy Group. He has no political party affiliation.

Mr. Ghaloumyan is married and has three children.