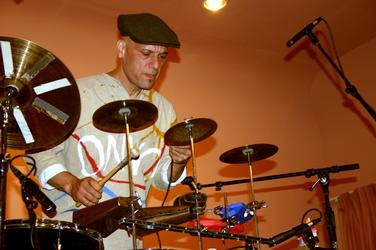 Arto Tunçboyaciyan, percussionist and singer, was born in Turkey in 1957. One of the greatest influences on both his music and his life has been his brother Onno, a musician himself, who encouraged Arto to develop his character not just as a brother but also as a friend and as a musician.

At the age of 11, Arto began his career by playing and recording traditional music with his brother, thus establishing himself as a professional musician throughout Turkey and Europe.

In 1981 Arto moved to United States to explore new creative influences, to add a new dimension to his own vision of life, and to escape from the subtle restrictions on identity he had to face as part of the Armenian minority in Turkey. Since then, he has performed both as a member of various musical groups and also as a solo artist throughout the world.

In 1985 his first solo album was released by the Dutch label Keytone: Virginland and Main Root.

It was during this time that Arto started a meaningful collaboration with the Armenian oud player Ara Dinkjian. Arto invited Dinkjian to record the duo project Tears of Dignity with him and also the 1998 album entitled 'Onno' - an homage to Arto's brother and mentor, Onno Ohannes Tunçboyaciyan who tragically died in a plane crash in 1996. The compositions on this album are a clear expression of Arto's memories of his brother, 27 years his close friend, music collaborator and teacher.

Along with Ara Dinkjian, Arto was a member of the group “Night Ark” which recorded following CDs: Picture, Moments, Wonderland and Petals On Your Path. In 1998 Arto participated in the Italian project TRIBOH with singer Maria Pia Vito and pianist Rita Marcotulli. As result of this collaboration, the album Triboh was recorded and released on the Italian label Polosud.

Arto’s album “Every Day is a New Life” was created out of his collaboration with Paul Winter. “Aile Muhabbeti”, another CD, was released in Turkey as a soundtrack for the film of the same name. Arto composed and performed this CD with various Armenian and Turkish musicians.

To his Anatolian friends and fans, Arto devoted the album "Türke sözlü hafif anadolu müzigi" ('Light anatolian music with Turkish words'.) This album was recorded in winter 2002/3 and had been finally released in Turkey in Spring 2005.

In February 2004, Arto Tunçboyaciyan recorded his new solo-project "Artostan" in Yerevan – a selection of songs from his solo performances - a radiophonic travel diary through Arto’s unlimited soundscapes and his philosophical homeland.

Contemporaneous is the album "Love Is Not in Your Mind" - a duo project with the pianist of the Armenian Navy Band Vahagn Hayrapetyan - a very personal declaration of love dedicated to his mother.

The international release of these both albums was in January 2005 by Heaven and Earth.

The Armenian Navy Band was founded by Arto Tunçboyaciyan, the band's charismatic composer, multi-instrumentalist and vocalist. He was born in Galateria (near Istanbul) as a son of a poor shoemaker family of Armenian-Anatolian descent. From a very young age, music has been a fundamental element of life, by which Arto tries to communicate his greatest values: love, respect and truth.

After performing music for more than 30 years on all the important stages in the world and attempting repeatedly to discover open-minded and enthusiastic musicians, Arto Tunçboyaciyan realized that he wasn't finding them either in the Western jazz scene nor in his Anatolian homeland. He was looking for musicians able to make his “sound worlds” audible in the form he had wanted for a long time and which fit his identity.

After a first short visit in 1996 to the country of his ancestors, he returned to the Armenian capital of Yerevan in 1998. There he met the young and very talented pianist and keyboader Vahagn Hayrapetyan, son of a well-known musical family in Armenia. He asked Vahagn to introduce him to other musicians in town to see if eventually he could start a new band project with in Yerevan. At the first session organized by Arto and Vahagn, ten young, outstanding and exuberant musicians joined the rehearsals. They are until today the core of the Armenian Navy Band.

Some months later, in 1999, the band recorded its first album entitled “Bzdik Zinvor” out of a small studio in Yerevan, followed by its first European tour in 2000, where this unique group of musicians gained the hearts of audiences in Italy, Germany, Austria and Spain with their Avantgard Folk Music.

This tour was followed by concerts in France, Belgium and the Netherlands. During a stopover in 2001 in Istanbul, they recorded their second album “New Apricot”.

Since then, the band has performed regulary in many European countries and in Turkey, while side projects were born during recording sessions for CDs in Istanbul, Yerevan and in the US.

In autumn 2003 in a studio in Yerevan Arto and the Armenian Navy Band realised the first part of larger sound project to be continued during the next years: “Sound of Our Life - Part One: Natural Seeds”. This album was released in March, 2004 in Europe. The US release is planned for fall 2005. It’s an one hour lasting composition for ANB, quire and string orchester. Under the titel of “Sound of Our Life” Arto Tunçboyaciyan will continue to record his music diary on future recordings.

Arto's original compositions express the sounds of the past generations along with today's life; this is what he calls "avant-garde folk". We can say that the Armenian Navy Band represents the synthesis of Arto's musical journey and life experiences. As an ensemble with particular virtuosity, it also has great ability in performing live music and compositions taken both from the traditional and from the modern culture of Armenia.

The Armenian Navy Band is without a doubt the most comprehensive expression of Arto Tunçboyaciyan’s 35-year musical journey; it represents clearly his virtuosity as a composer, multi-instrumentalist and singer and demonstrates the cumulation of his life experience and philosophy. The instrument line-up varies from traditional: duduk, zurna, kemanche, kanun to contemporary: trombone, alto sax, tenor, soprano sax, trumpet, bass, drums, keyboard and piano. This ensemble, along with the unique vocals and percussion, allows Arto to create a musical journey of the past and present, bringing the sound into the future.

In early 2004, Arto Tunçboyaciyan opened the “ANB Avantgarde Folk Music Club” in the historical heart of Yerevan - which has already established itself as the place to be to hear good music in Yerevan.

Every year, the Armenian Navy Band performs 4 seasons of 2-3 weeks in order to practice new songs and sounds. In the meantime, Arto’s musician friends from all over the world and from Armenia are lured by the spirit of the ANB Avantgarde Folk Music Club and join the regular musicians on stage.

During the four-week summer season in 2004 at the “ANB Avantgarde Music Club”, the band recorded their album "How much is your's" - Avantgarde Folk Music with Armenian words. The CD bubbles full of the energy of the joy of life. It is a feast of happiness, a manifest of warm affection for the Armenian people people and urging caution to protect the still untouched nature of this small country in the Caucasus mountains. This album will be released in summer 2005 on the German label Heaven and Earth.