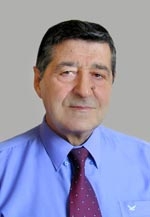 From 1957-1960 Mr. Sadoyan first studied at the Yerevan Polytechnic Institute and graduated with a degree in mathematics from Yerevan State University in 1965.

From 1965-1967 he was the head of Mathematical Modeling Division at the Yerevan Central Laboratory of Scientific Research Supervision Systems. From 1967­1968 he was the senior economist in the Modeling Division of the State Plan Institute of Economics. From 1968-1970 he did his postgraduate studies at Moscow State University. He spent the next two decades first as a senior professor and later scientific associate at Yerevan State University.

From 1995-1999 he served as a deputy in the NA (electoral district # 11) and he was on the NA Standing Committee on Social, Health Care and Environmental Protection Affairs. He was a member of the National Democratic Union Faction.

1999-2003 was his second term as a deputy of the NA (electoral district # 13) and he was on the NA Standing Committee on State and Legal Affairs. He was a member of first the National Democratic Union Faction and then later was not a member of any faction or deputy group.

On May 25, 2003 he was reelected to the NA from the proportional list of the Justice Alliance and he is currently on the NA Standing Committee on State and Legal Affairs and a member of the Justice Faction. He is also the founding president of the National Democratic Alliance Party.

Mr. Sadoyan is married and has two children.