The Armenian Revolutionary Federation (ARF), also known as the Dashnaktsutiun (or in Western Armenian, the Tashnagtsutiun), is a Armenian political party with a nationalistic, socialistic, and democratic ideology. It was established in Tbilisi in 1890 as a federation of revolutionary Armenian groups. It is a member of the governing coalition in Armenia, with members in both Parliament and Cabinet. The party is a full member of the Socialist International. A member of the party is known as a Dashnaktsakan (or in Western Armenian a Tashnagstagan).

Misc texts to be incorporated into site 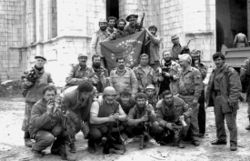 The ceremony began with the Armenian national anthem and "Mshak Banvor," the official anthem of the ARF -- which was performed the ARF Pasadena, CA "Nigol Touman" Badanegan Chapter -- followed by a speech of ARF Armenia Supreme Body Representative Armen Rustamian.

After welcoming the representatives of the Armenian political parties and ARF members from across the world, Rustamian pointed to the importance of unification to settle the national issues.

In his turn, ARF Bureau Representative Hrant Margarian noted that during its 115-year history, the ARF Bureau had never had a building of its own; it had offices, places to work, but now, it has it has its own building in Armenia allowing to show the party in its entirety.

"Today we are not in a position to chose our tasks because the issues of Armenians are our issues from the strengthening of the Armenian statehood and ensuring its security to the people's prosperity and acquiring our nation's collective rights from Artsakh to Javakhk and the fragments of the Armenians in Western Armenia, fragments of Armenians in the former Soviet Union and more organizing of the Diaspora."

Margarian noted that the new building was acquired due to generous donations from party members and sympathizers, among them Varand and Hury Melkonians from Western United States. He also mentioned Zohrap and Noyemi Tazians whose donation helped to establish a library-museum in the building, adding there are also other donors.

Varand Melkonian said that being a ARF sympathizer he was happy to be given a chance to contribute to the Armenian Cause and serving the Armenian national interest.

Bishop Vazgen Mirzakhanian bestowed the blessings of Catholicos Garegin II and wished luck for the works to be accomplished.

Hrant Margarian and Varand Melkonian cut the band at the building entrance and then the guests explored the rooms of the 3- story building followed by a treatment.

The building will house several offices of the ARF Bureau, including the Youth office, Hay Dat office, Economic office and others.