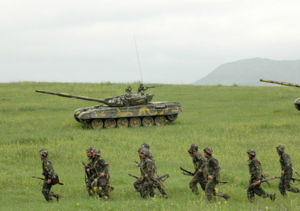 Units of the Armenian army operating in field exercises.

The Armenian military both supports the forces of Nagorno-Karabakh and the long-term objective of Armenian military self-reliance. Armenia has worked toward making the Armenian Army a small, well-balanced, combat-ready defense force. Chief architects of the force were General Norat Ter-Grigoriants, a former Soviet deputy chief of staff who became overall commander of the new Armenian Army; Vazgen Sarkisian, named the first minister of defense; and Vazgen Manukian, who replaced Sarkisian in 1992. 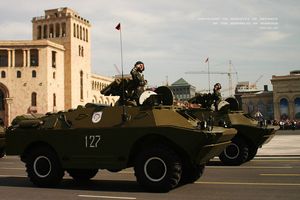 Eighteen-year-old men constitute the primary pool of conscripts. New trainees generally are not sent into combat positions. The Armenian public was hostile to conscription in the Soviet period; the practice of assigning Armenian recruits to all parts of the Soviet Union prompted large demonstrations in Erevan. That attitude continued in the post-Soviet period. In the first two years of the new force, recruitment fell far short of quotas. The draft of the fall of 1992, for example, produced only 71 percent of the quota, and widespread evasion was reported. 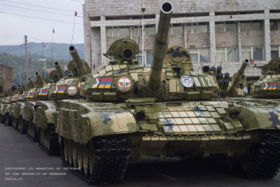 T-72 tank on parade during the May 9, 2007 parade celebrating the liberation of Shushi.

Conscripts generally lack equipment and advanced training, and some units are segregated by social class. Officer elitism and isolation are also problems, chiefly because the first language of most officers is Russian. Desertion rates in 1992-93 were extremely high. In early 1994, the defense establishment considered formalizing the status of the large number of volunteers in the army by introducing a contract service system.

The Armenian air defense forces, virtually nonexistent in 1991, were equipped and organized as part of the military reform program of Ter-Grigoriants. Total air defense strength was estimated at 2,000 troops in 1994. The new military aviation program of the air force has been bolstered by the recruitment of Soviet-trained Armenian pilots, and new pilots receive training at the Aviation Training Center, run by the Ministry of Defense. Some modern training aircraft are available at the center. Pilots receive special housing privileges, although their pay is extremely low. Some Soviet-made Mi-8, Mi-9, and Mi-24 helicopters are available to support ground troops, but only one squadron of aircraft was rated combat-ready in 1994. Most of Armenia's fixed wing aircraft, inherited from the Soviet Union, were unavailable because of poor maintenance. 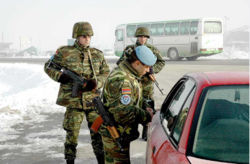 An Armenian patrol maintaining a checkpoint in Kosovo. The platoon sized unit of three squads has been serving in Kosovo as a part of the KFOR peacekeeping force since February 2004.

The Russian presence continued in 1994, with an operational command in Erevan providing engineer, communications, logistics, aviation, and training capabilities. Under the 1992 Treaty on Collective Security, which apportioned Soviet weaponry among the former Soviet republics, Armenia was allotted 180 T-72 tanks, 180 BMP-1K armored fighting vehicles, sixty BTR-60 and BTR-70 armored personnel carriers, twenty-five BRM-1K armored fighting vehicles, thirty 9P-138 and 9P-148 guided missiles, and 130 artillery pieces and mortars. An unknown number of weapons systems in the Osa, Strela, Igla, and Shilka classes were also designated for transfer. Much of this equipment was no longer serviceable by the time it was turned over, however.

Significant amounts of military equipment ranging from small arms to armor and artillery was captured from Azerbaijan by the joint Armenia/Artsakh forces during the Artsakh war. This materiel boosted what the Republic of Armenia had in its military inventory, and made up the main part of the MK Republic's arsenal. Since the 1994 cease fire, all three sides of the conflict are continuing to acquire military equipment. However, due to its petroleum export revenues, Azerbaijan has spent the most on new hardware and it is suspected that it has surpassed the limit of equipment imposed by the Conventional Forces in Europe Treaty. If one calculates the kill ratio in the Artsakh war out of the approximately 30,000 aggregate casualties, the ratio is 1 : 5 in favor of the joint Armenian forces (to remind, the kill ratio was 1:16 in favor of the U.S. in Vietnam). For every Armenian soldier killed in action, 5 Azeri soldiers died, since Armenian losses were roughly 6,000 soldiers and for Azerbaijan they were roughly 22-24,000. Judging by how poorly Armenian forces were equipped especially in the early years of the War, this superior kill ratio can only be attributed to the superior Armenian command structure and motivation of the individual soldier. Whats more, not only did Azerbaijan have vastly more numerous war materiel, but also employed several thousand foreign mercenaries, from professional Russian and Ukrainian pilots and tank crews, to the semi-irregular mujahideen from Afghanistan, Chechnya (Shamil Basayev's battalion) and Pan-Turko/Pan-Islamic fighters in smaller numbers from Central Asia, the Balkans and the Middle East. Base data obtained from http://lcweb2.loc.gov/frd/cs/amtoc.html