Difference between revisions of "Armenian Legion" 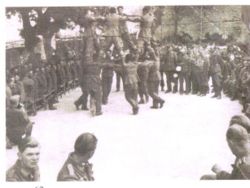 The Armenian Legion or Armenische Legion was the name given to the 812th Armenian Battalion which was a foreign unit comprised of several thousand men. It was conscripted into the German Wehrmacht during World War II. The battalion was trained by SS officers. The declaration made by Alfred Rosenberg of the Armenians being an Indo-European people came simultaneously with the conscription of the Armenians in Turkey, the Soviet Union and Western Europe, to destroy Turkey and the Soviet Union[1]. The vision of an independent Armenia was revived. The expected prize was an Armenian state (in an expected new order) in a new world created by the Nazi-Germany[2].