Difference between revisions of "Armenian Genocide"

Summary of Events Leading up to the Genocide

Although Armenians were second class citizens in the Ottoman Empire, they lived in relative harmony with Turks for centuries before the forces of nationalism transformed the situation. Armenians were known as the "loyal group". During these times, although Armenians were not equal and had to put up with certain special hardships, taxes and second class citizenship, they were pretty well accepted and there was relatively little violent conflict. Things began to change for a number of reasons. Nationalism, a new force in the world, reared its head and made ethnic groupings self-conscious, and the Ottoman Empire began to crumble. It became known as "the sick man of Europe" and the only thing holding it together was the European powers' lack of agreement on how to split it up.

As other Christian minorities gained their independence one by one, the Armenians became more isolated as the only major Christian minority. Armenians and Turks began to have conflicting dreams of the future. Some Armenians began to call for independence like the Greeks and others had already received, while some Turks began to envision a new Pan-Turkic empire spreading all the way to Turkic speaking parts of Central Asia. Armenians were the only ethnic group in between these two major pockets of Turkish speakers and the nationalist Turks wanted to get rid of them altogether.

As European powers began to ask for assurances that Armenians receive better treatment, the government began to treat the Armenians worse and worse. From 1894-6 hundreds of thousands of Armenians died in the Hamidian Massacres ordered by Sultan Abdul Hamid II.

A coup by 'progressive' Young Turks in 1908 replacing the Sultans government was supported by Armenians. Unfortunately, promised reforms never came, and in fact a triumvirate of extreme Turkish nationalists took complete dictatorial control, Enver, Jemal and Talat. It was they who masterminded the plan to completely eradicate the Armenian race in a step towards fulfilling their pan-Turkic dreams. 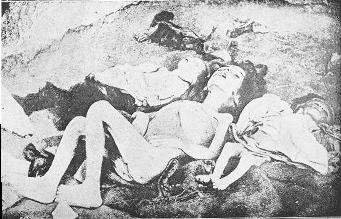 A starved mother with her two starved children

World War One gave the Young Turk government the cover and the excuse to carry out their plan. The plan was simple and its goal was clear. On April 24th 1915, commemorated worldwide by Armenians as Genocide Memorial Day, hundreds of Armenian leaders were murdered in Istanbul after being summoned and gathered. The now leaderless Armenian people were to follow. Across the Ottoman Empire (with the exception of Constantinople, presumably due to a large foreign presence), the same events transpired from village to village, from province to province.

The remarkable thing about the following events is the virtually complete cooperation of the Armenians. For a number of reasons they did not know what was planned for them and went along with "their" government's plan to "relocate them for their own good." First, the Armenians were asked to turn in hunting weapons for the war effort. Communities were often given quotas and would have to buy additional weapons from Turks to meet their quota. Later, the government would claim these weapons were proof that Armenians were about to rebel. The able bodied men were then "drafted" to help in the wartime effort. These men were either immediately killed or were worked to death. Now the villages and towns, with only women, children, and elderly left were systematically emptied. The remaining residents would be told to gather for a temporary relocation and to only bring what they could carry. The Armenians again obediently followed instructions and were "escorted" by Turkish Gendarmes in death marches.

The death marches led across Anatolia, and the purpose was clear. The Armenians were raped, starved, dehydrated, murdered, and kidnapped along the way. The Turkish Gendarmes either led these atrocities or turned a blind eye. Their eventual destination for resettlement was just as telling in revealing the Turkish governments goal: the Syrian Desert, Der Zor. Those who miraculously survived the march would arrive to this bleak desert only to be killed upon arrival or to somehow survive until a way to escape the empire was found. Usually those that survived and escaped received assistance from those who have come to be known as "good Turks," from foreign missionaries who recorded much of these events and from Arabs. 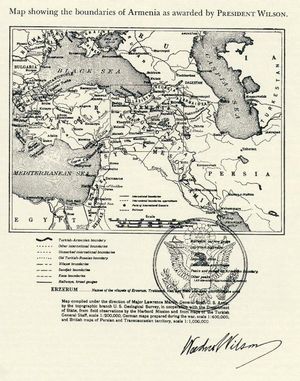 After the war ended, the Turkish government held criminal trials and found the triumvirate guilty in abstentia. All three were later executed by Armenians. Turkey agreed to let the US draw the border between the newly born Republic of Armenia and the Turkish government. What is now called Wilsonian Armenia included most of the six western Ottoman provinces as well as a large coastline on the Black Sea. Cilicia, a separate Armenian region on the Mediterranean, was to be a French mandate. Mustafa Kemal's forces pushed the newly returned Armenian refugees and forces from these lands and forced a new treaty to be written which was an insult to Armenian victims. They were basically told never to return and that they would never receive compensation. The Kars and Ardahan provinces of Armenia were taken as well in an agreement with the Soviet Union.

The Turkish government has in the past few decades been denying that a genocide ever occurred and spending millions of dollars to further that view. This is adding insult to injury and will cause bad feelings to continue much longer than would otherwise be the case between the peoples. Those who say forget about it, it is in the past, are wrong. Unless crimes like this are faced up to and compensated for, they will be committed again and again by people who do not fear prosecution or justice. Read what Hitler said before beginning the Jewish Holocaust here.

A class action suit against New York Life insurance company by genocide survivors was filed in 1999. They were sued for not being forthcoming in paying up for policies of those killed in the genocide. The suit was settled in 2004 for $20 million, and payouts began to individuals and some Armenian charitable organizations.

A 2002 study by the International Center for Transitional Justice (ICTJ), a New York-based human rights organization, ruled that the slaughter of some 1.5 million Armenians fits into the internationally accepted definition of genocide. The study was commissioned by TARC - a group of Armenians and Turks set up by the US State Department.