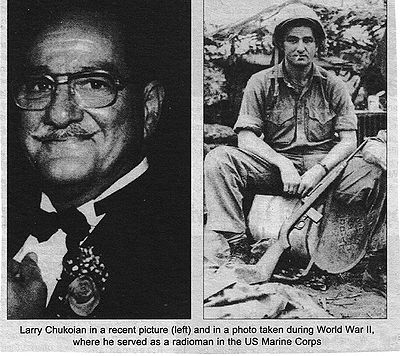 Lazarus Chukoian was born in Providence, RI, to Nishan Chukoian of Palu, and Angele Kadian Chukoian of Bolis. He moved to New York in 1937 with his mother and father, attended New York Public Schools, and was a member of the New York Shavasbian Chapter of the AYF.

He served in the U.S. Marine Corps from 1942-1946. Employed as a photo-engraver until his retirement in 1985, he married Mary Guzelian in 1946. Blessed with three children, Bruce, Nicholas and Sara, and two grandchildren, he currently resides in Maywood, NJ, and is a member of Sts. Vartanantz Armenian Apostolic Church in Ridgefield, NJ.

C.K. Garabed: Everybody calls you Larry, but your given name is really Ghazaros, and your car license plate reads: “GHAZAR,” right?

Larry Chukoian: Yes, I treasure my Armenian name, and my license plate reminds everybody of it.

CK: What did they call you iin the Marine Corps?

LC: Chuck, derived from my last name, Chukoian. You know how Armenian names get murdered in the military service. So it could have been worse.

CK: And how! When and why did you enlist in the Marine Corps?

LC: It was almost a year after the attack on Pearl Harbor, August 1942 to be exact, when I enlisted.

CK: And, of course, you got your boot training at Parris Island, South Carolina. Then what?

LC: I was sent to Camp Le Jeune, North Carolina, where I was trained in communications and radio transmission. Then to Oceanside, California and overseas.

CK: Did you see combat?

CK: And you were involved in combat even though you were a radioman?

LC: Sure. As part of my company, I had to take part in all their operations.

CK: Now, I know that you were aware of the fact that the US cryptographers had broken the Japanese diplomatic code even before Pearl Harbor. Did the Japanese ever break any of the US codes?

LC: They did, yes. That’s why we had to change radio frequencies all the time. They would also generate interference with variable siren-like signals.

CK: Were there any codes that we used that they couldn’t break?

CK: OK. Now just tell me a little about that. Who were they? How were they recruited and how were they trained?

LC: Well, I don’t know how they were recruited. I guess the Corps put out a notice that they were needed and they were sent to us. I had a man assigned to me called Geronimo.

CK: That was your idea – to give him that nickname?

CK: You are aware, of course, that the historical Geronimo was of the Apache tribe. Yet the Navajo language is closely related to the Apache tongues. So I guess it was OK. Did he speak English?

CK: Did he have a family?

CK: Was he away from them all that time?

CK: Where was he? Was he with you in the Pacific?

CK: So was he considered a US serviceman also?

LC: Yes, of course. He was enlisted, perhaps semi-voluntary. They needed him, so he signed up.

CK: Who came up with this idea?

LC: I guess the Marine Signal Corps. They needed something to baffle the Japanese. I read in the Marine Corps magazine that a white man who lived on the Navajo reservation approached the Marine Corps with the idea and it was well received.

CK: Did the other services use this system?

LC: No, only the Marines, as far as I know. From what I read, code talkers were assigned to every major landing in the Pacific island war.

CK: How did it work? When did you use them?

LC: Whenever I needed a super-secret code, I called them. For instance, when we ran out of ammunition, I didn’t want the Japanese troops in the area to know, so I couldn’t use my code to say that we needed ammo.

CK: Was Geronimo there with you?

LC: No, I had to call HQ and ask that he be sent over. Then I told him what to send.

CK: What exactly was the methodology? What did it actually consist of?

LC: I would tell him a phrase at a time, and he would render it in his language over voice radio, not by Morse Code.

CK: And at the other end?

LC: There would be another Navajo code talker who would translate it verbally back into English to my counterpart, who in turn, would radio Guam to send us ammunition.

CK: How did they radio Guam?

CK: Well, if they could go that way, why couldn’t you?

LC: It’s a question of distance. Our equipment has its limitations. Besides, the ships and Guam had many more elaborate codes to select from.

CK: How long did that go on?

LC: About two months at a time, during combat.

CK: And it extended over how long a period of time?

CK: And you got out when?

CK: Did you ever see Geronimo again?

LC: No. He wrote to me and I wrote to him, and that was it. That’s what happens usually. Only six of us came back, anyway, from the original company of approximately 300 men.

CK: And you were sworn to secrecy even after that?

LC: Absolutely! It wasn’t until 1970 that the information on the Code Talker Project was declassified and released. I don’t know why they kept it secret that long. Of course, there are a lot of other things that I can’t tell you about. I don’t know how I can keep my silence that long.

CK: There’s always something left classified, no matter how much time passes. However, a movie is scheduled to be released any day now on this very subject.

LC: I’d like to see that, and see how much of it is factual. But I think it’s a good idea to give credit to the Navajo servicemen for the role they played in helping to win the Pacific War.

CK: Well, the movie’s title is “Windtalkers,” and I’ll think of you when I see it. Thanks.