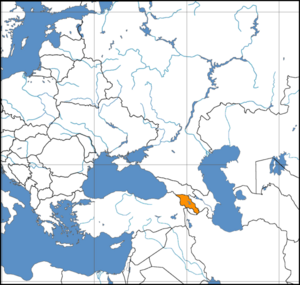 Armenia (Armenian: Հայաստան Hayastan, Հայք Hayq), officially the Republic of Armenia, is a landlocked mountainous country in Eurasia between the Black Sea and the Caspian Sea, located in the Southern Caucasus. It shares borders with Turkey to the west, Georgia to the north, Azerbaijan to the east, and Iran and the Nakhichevan exclave of Azerbaijan to the south. A former republic of the Soviet Union, Armenia is a unitary, multiparty, democratic nation-state and one of the oldest and most historic civilizations in the world with a rich cultural heritage, as well as the first nation to adopt Christianity as its official religion. Although Armenia is constitutionally a secular state, the Christian faith plays a major role in both its history and the identification of the Armenian people.

A generally accepted definition of the extent of Europe, whilst excluding much of historic Armenia, does include present-day Republic of Armenia, the boundary between Asia and Europe being regarded as running along the Caucasus.

The original Armenian name for the country was Hayq. The name later evolved into Hayastan a combination of Hayasa (Հայասա) or Hayk (Հայկ) with the Persian suffix '-stan' (land) in the Middle Ages. Hayk was one of the great Armenian leaders after whom the The Land of Hayk was named. According to legend, Hayk was a great-great-grandson of Noah (son of Togarmah, who was a son of Gomer, who was a son of Japheth, who was a son of Noah), and according to an ancient Armenian tradition, a forefather of all Armenians. He is said to have settled at the foot of Mount Ararat, traveled to assist in building the Tower of Babel, and, after his return, defeated the Babylonian king Bel (believed by some researchers to be Nimrod) in 2492 BCE near the mountains of Lake Van, in the southwestern part of historic Armenia (present-day eastern Turkey). Pre-Christian accounts[6] suggest that Nairi, meaning "land of rivers", used to be an ancient name for the country's mountainous region, first used by Assyrians around 1200 BCE. The traditional etymology for the ethnology is from Armenak or Aram, the great-grandson of Haik's great-grandson, and another leader who is, according to Armenian tradition, the ancestor of all Armenians. Akkadian inscriptions (2400 BCE) mention Armani, locating them in the southern Armenian Highlands near Lake Van. Armani was the earlier form of Armens who were of Proto-Indo-European descent.[8] To this day Assyrians(direct descendent's of Akkadians) refer Armenians by their inscription form Armani. The first name of the country was Hayq.