Difference between revisions of "Arkadi Hambardzoumyan" 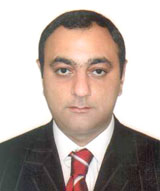 Arkadi Hambardzoumyan was born on April 9, 1971 in Yerevan.

Mr. Hambardzoumyan graduated with a degree in law from Yerevan State University in 1994.

From 1986-1989 he was a worker in the Yerevan Bread Factory # 5. From 1989­1991 he was a LCYU secretary in Kat Production Complex. From 1996-1997 he worked as an investigator in the Prosecution Office of the Shahoumyan District in Yerevan. In 1997 he was appointed president of Derjhava and Slavgroup (Russia) companies.

On May 25, 2003 he was elected to the NA from the proportional list of the Rule of Law Party and he is currently on the NA Standing Committee on Defense, National Security and Internal Affairs. He is a member of both the Rule of Law Faction and party.

Mr. Hambardzoumyan is married and has three children.